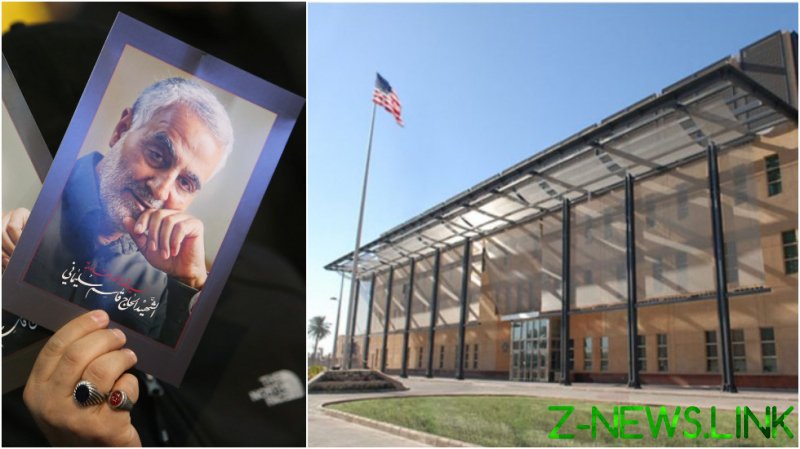 The officials offered few details about the partial withdrawal, saying only that it would be “slight” and “temporary,” with one indicating staff would return only after the January 3 anniversary of the Soleimani killing. Of the hundreds of diplomatic staff members stationed at the embassy, it is unclear how many will leave for the rollback.

“It’s a minor drawdown based on security reservations from the US side. They could come back – it’s just a security blip,” a senior Iraqi official told AFP on condition of anonymity, adding that the move did not signal any blow to the relationship between Baghdad and Washington.

We knew ahead of time, and top diplomatic staff, including the ambassador, are staying, so this is not a rupture of diplomatic ties.

The State Department declined to confirm the reported “de-risking” operation, instead stating that it “continually adjusts its diplomatic presence at embassies and consulates throughout the world in line with its mission, the local security environment, the health situation, and even the holidays.” However, a spokesperson added that Ambassador Matthew Tueller remains in the country, and that the embassy would continue to operate.

US President Donald Trump has overseen a dramatic spike in hostilities with Iran since he took office in 2017, keeping up a steady stream of sanctions and warlike rhetoric which culminated in the Soleimani assassination last year. Regional tensions spiked again on Friday after the murder of a prominent Iranian nuclear scientist, Mohsen Fakhrizadeh, who was targeted in an ambush by unknown assailants. While Tehran has yet to formally pin blame on any foreign actor, Iranian officials have suggested American and Israeli involvement in the attack.

In retaliation for the US drone strike that killed Soleimani – a beloved figure in Iran who led the country’s elite Quds Force – Tehran launched a barrage of rockets at two bases housing US troops in Iraq, reportedly inflicting brain injuries on dozens of soldiers. In the time since, Iranian officials, including Supreme Leader Ayatollah Ali Khamenei, have vowed further revenge, while the US military has repeatedly warned that Iraqi militias supported by Iran could carry out reprisals.

Washington threatened to pack up and close the Baghdad embassy following a string of rocket attacks near the mission earlier this year, blaming the blasts on Iran-aligned militia group Kataib Hezbollah, whose commander was killed alongside Soleimani in the January 3 drone strike. Though the diplomatic pull-out never materialized, the Trump administration has continued to pressure the Iraqi government to rein in the militia groups since.