US “threatens” Russia and sanctions 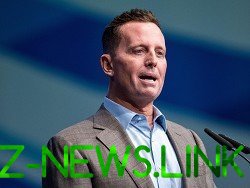 U.S. Ambassador Richard Grenell paid another visit to Germany. In an interview, he once again raised the issue of sanctions against Germany because of the gas pipeline “Nord stream – 2”.

In January Grenell warned about the possible consequences and hinted at sanctions. However, German Chancellor Angela Merkel during his visit the Ambassador again said that gas transit through “Nord stream” does not entail the dependence of Germany from Russian energy. According to Grenell, Germany must take account of possible risks. “Northern stream” can enrich Germany not only gas, but also additional sanctions from the United States.

The ambassadors of America has been repeatedly urged to oppose construction of the pipeline. Recently, this request from the US were addressed to the new President of Ukraine.

On the contrary, the Austrian Chancellor Sebastian Kurtz has said that Vienna will continue to support the construction of this pipeline system. Moreover, Kurtz is confident that the transit of gas through the Nord stream will enhance energy security of Austria. In addition, the construction of the pipeline involved is one of the leading Austrian companies OMV.

Despite the claims of America, the project “Northern stream – 2” will be put into operation before the end of 2019.