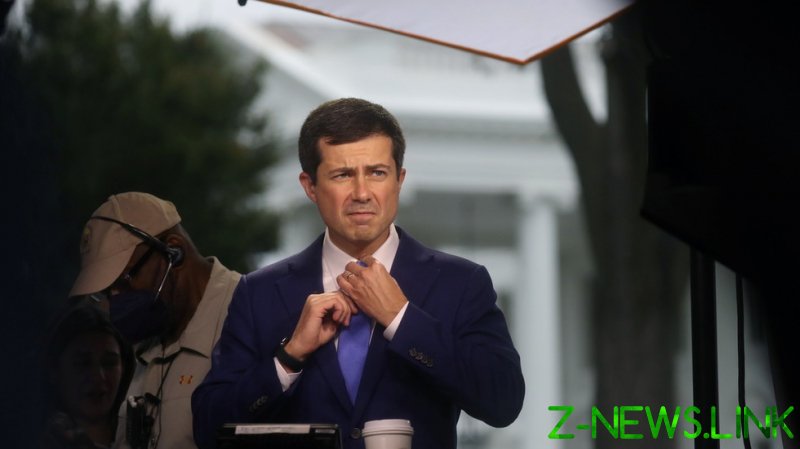 A spokesperson for Buttigieg revealed the White House official has been absent from the office on paid leave for approximately two months to Politico this week.

“For the first four weeks, he was mostly offline except for major agency decisions and matters that could not be delegated,” the spokesperson said. “He has been ramping up activities since then.”

Buttigieg will continue to “take some time over the coming weeks” to spend time with his husband, Chasten, and newborn children.

The transportation secretary’s absence has triggered some critics, as the revelation of his time away comes amid major supply chain issues hitting struggling US industries. Ports in the US have been overwhelmed. The Port of Los Angeles, it was announced this week, will be a 24/7 operation going forward to ease some of the pressure on the overwhelmed Port of Long Beach.

The White House has said major companies, such as Walmart, will also be expanding hours for their transportation efforts to hopefully make up for the supply deficits so many are facing.

“Pete Buttigieg has been on leave from his job since August after adopting a child – paternity leave, they call it – trying to figure out how to breastfeed. No word on how that went,” Fox News host Tucker Carlson said of Buttigieg on his show this week, a comment critics have blasted as “homophobic.”

Others, however, have been equally angry by Buttigieg’s lack of leadership at a critical moment.

“A cabinet member has been on leave for two months **and nobody noticed**. That is incredible,” conservative strategist Phil Kerpen added.

“The only valid and decent thing to say about Pete Buttigieg’s paternity leave is that adoption is beautiful; all parents, not just Cabinet secretaries, should have the ability to take leave from work to care for new children; and prioritizing family over work is noble,” journalist Glenn Greenwald added to the debate.

Supply chain issues and the White House’s response have come under heavy scrutiny in recent weeks after Labor Department data has put more of a spotlight on the issue, revealing companies are struggling to keep supply on shelves while also facing record numbers of people walking away from their jobs. This is as Americans are facing the biggest year-to-year consumer cost rise in years.