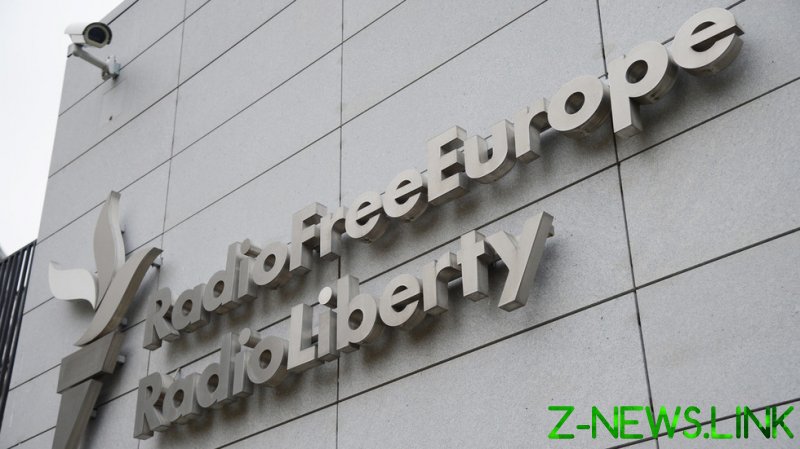 RFE/RL is registered by Russia’s Ministry of Justice as a foreign agent.

The cartoons, published by the US government-controlled outlet over many years, tend to glorify Ukrainian nationalism and take aim at both Russians and Russian speakers, while also depicting President Vladimir Putin and other officials in Moscow as bumbling idiots.

READ MORE: Ukraine is rightful heir to historic Kievan Rus & ‘distant relatives’ like Russia should not claim it as their own, says Zelensky

As well as clearly portraying Russians as sub-human, the pictures are also pro-Western, pushing a policy of integration into the US-led NATO bloc. This is presumably what attracted the propagandists at RFE/RL to the images.

In one of the them, Russian speakers are depicted as cockroaches, running away from the supposed “might” of the Ukrainian language. The insects appear to have the faces of Putin, Russian Foreign Minister Sergey Lavrov, and embattled Ukrainian opposition figure Viktor Medvedchuk, who is the subject of a politically motivated legal action in Kiev.

In another cartoon, an older woman is depicted as a stupid, backward Luddite for watching Svaty, a Russian-language comedy that was produced by Ukrainian President Volodymyr Zelensky, on an old-style TV. In contrast, a happy-looking Ukrainian family watches television with dubbing.

As well as anti-Russian sentiment, the caricatures also appear to mock serious issues, including a potential humanitarian crisis. One of Kustovsky’s drawings focuses on the issues surrounding the drought in Crimea. The region has had problems with water since 2014, when the Ukrainian government constructed a makeshift dam on the North Crimean Canal, which previously provided 85% of the region’s water supply. It connected the area to the River Dnieper, the fourth-longest river in Europe.

Kustovsky’s work has been featured on RFE/RL since at least 2014, and in that time, has produced hundreds of anti-Russian and pro-Ukrainian pieces. However, he has also dabbled in anti-Semitic art, having once portraying Gennady Kernes, the Jewish mayor of Kharkov, as a dung-beetle.

RT has reached out to RFE/RL for comment, asking whether Kustovsky’s images reflect its editorial line, and, if not, why it continues to publish them.