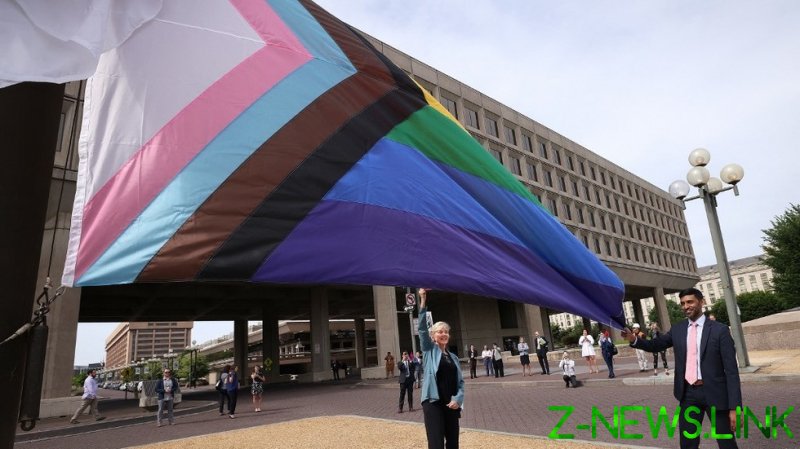 Secretary of State Antony Blinken announced on Monday that the State Department in Washington, DC will fly the ‘Progress’ flag between June 26 and June 28 – commemorating the anniversaries of the 2015 Supreme Court ruling legalizing same-sex marriage, and the 1969 Stonewall Riots, respectively.

“I think this is going to be a significant couple of days, and we will see the Progress flag flying at the State Department,” Blinken said during an LGBT-focused event held by the Atlantic Council, a NATO-backed think tank.

The flag itself takes the standard eight-striped rainbow design of the 1970s-era Pride flag and adds a number of colored chevrons representing those who identify as transgender (light blue and pink) and people of color (black and brown). Some versions include a yellow triangle with a purple circle to represent intersex people. The design was dreamed up in 2018 by Portland-based designer Daniel Quasar, who uses “xe/xem pronouns,” and updated again this year by Intersex Equality Rights UK.

The ever-expanding list of categories rolled into the flag has been criticized online. Writing for RT earlier this month, author Chris Sweeney described it as “essentially morphing into a symbol for anyone who’s not white and heterosexual.”

While the uber-woke flag will grace Foggy Bottom for a few days at the end of the month, the standard-issue pride flag will hang outside US embassies and diplomatic outposts around the world for the duration of June. Even in Vatican City, home of the Catholic Church and residence of the Pope, the flag hung from a balcony outside the US embassy. It was, however, conspicuously absent from the US embassy in Riyadh, Saudi Arabia.

Speaking during Monday’s event, Blinken said it is “hugely important” for US embassies to fly the Pride flag to show support for the “defense, support, the protection of the LGBTQI persons around the world.”

Blinken has also authorized embassies to fly ‘Black Lives Matter’ banners for the rest of the year. Former President Donald Trump’s administration, by contrast, only allowed the American flag to fly outside US embassies.