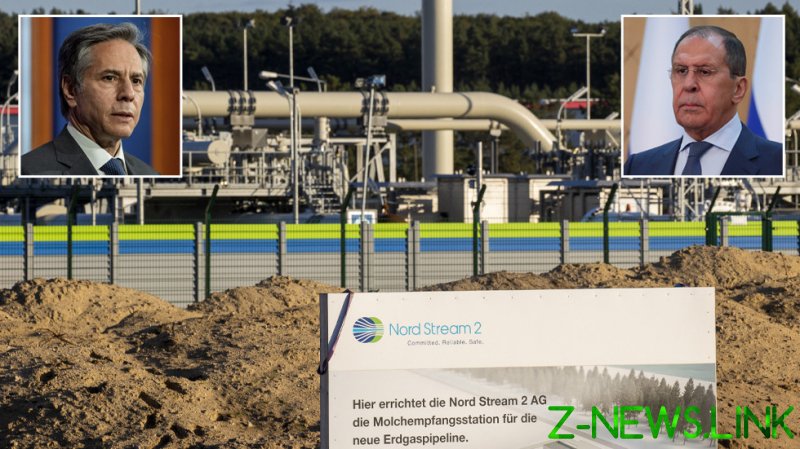 That’s according to a senior American State Department official, who noted that the subject could come up in bilateral discussions between Antony Blinken and Sergey Lavrov, in what will be the first face-to-face meeting between the two.

Blinken is currently in Denmark and will head to Iceland for the Arctic Council summit after meetings with Danish politicians and the country’s queen. The pipeline goes through part of Denmark’s waters, and the topic may also be brought up with officials in Copenhagen.

“I suppose it may come up. I mean, I think our position is very clear. We’ve made that clear, not just the Danes but everybody else, where we stand on that,” the official said. “And I think the same holds for Lavrov. We’ve been very clear, as has the Congress, in our views of Nord Stream 2, and that it is a Russian strategic project that undermines European security, European energy security. “

The State Department representative also noted that Washington is looking to build a “more predictable, stable relationship” with Moscow.

When finished, Nord Stream 2 will connect Russia to Germany via the Baltic Sea. It aims to protect Berlin’s energy security and make the country less reliant on third countries transiting gas, thereby lowering the price. As things stand, much of Europe’s gas comes from Russia via Ukraine, and Kiev receives hefty fees for pipeline usage. The pipeline is currently around 95% complete.

The construction of Nord Stream 2 has been significantly hindered by US sanctions. Washington has imposed numerous packages of measures against companies involved in the building, maintenance, insurance and certification of the project, leading some to pull out altogether.

According to the US, the pipeline will undermine Europe’s security, but some have accused the Americans of opposing it for economic reasons, as the country looks to increase its exports of liquefied natural gas to the continent.