‘US SecDef has no plan to resign’: Pentagon finally reacts to ‘troubling’ Kabul airport scenes, vows to continue HALTED evacuation 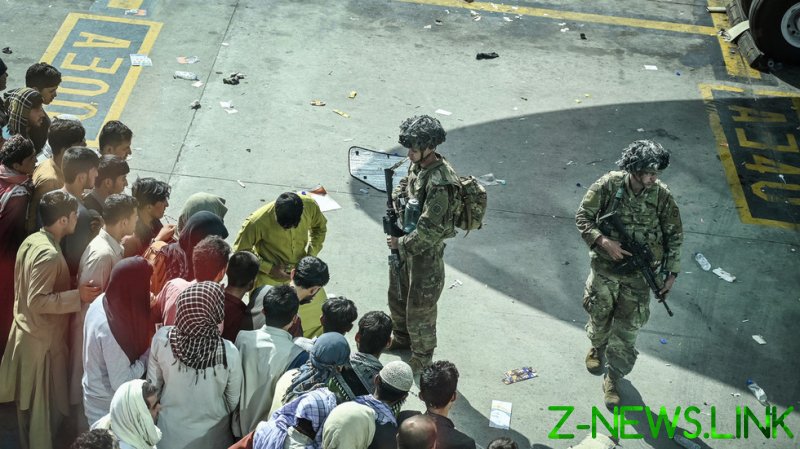 The US forces are working with “Turkish and other international troops” to clear the airport, Admiral John Kirby told reporters on Monday, in first official remarks after the shocking scenes of Afghans clinging to airplanes and seemingly falling to their deaths made rounds on social media.

Austin has authorized the deployment of another battalion to Kabul, which would bring the total number of US troops holding the airport to 6,000. However, all inbound and outbound flights have been halted “out of abundance of caution.”

Kirby described the video of Afghans running alongside one US plane on the tarmac as “troubling.” He did not comment on the subsequent video that allegedly showed someone falling off the plane to their death.

“Several hundred” people have been flown out of Kabul before the flights were halted, he told reporters.

The Pentagon said two armed men were killed by US troops at Hamid Karzai airport, but there was “no indication” that they were Taliban fighters.

President Joe Biden had ordered all US forces to leave Afghanistan by August 31, but explicitly told reporters that the US-backed Afghan government was capable of holding out on its own and that the withdrawal would not turn into “another Saigon” – referring to the 1975 collapse of the US-backed South Vietnam. By Sunday, however, the Taliban had control of pretty much the entire country, save the Kabul airport. Government forces largely surrendered without firing a shot, while President Ashraf Ghani resigned and went into exile.

Asked about the possible threat of terrorism from Afghanistan in the future – the reason Washington cited to stay in the country long after ending the hunt for Osama Bin Laden and Al-Qaeda, blamed for the 9/11 attacks – Kirby said it was “too early to assess.”