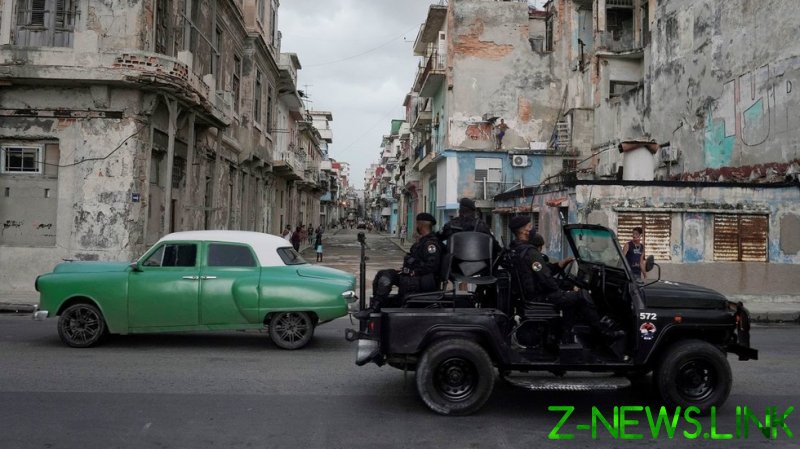 Announced by the Treasury Department on Friday, the new sanctions targeted Cuba’s National Revolutionary Police, as well as its director Oscar Callejas and his deputy Eddy Sierra, saying they worked to “suppress peaceful, pro-democratic protests in Cuba” that erupted earlier this month.

Biden met with leaders of Cuban diaspora groups at the White House soon after the penalties were unveiled, pledging “There will be more, unless there’s some drastic change in Cuba, which I don’t anticipate.”

Though largely symbolic, the sanctions follow another round of penalties imposed last week on Cuba’s Defense Minister Alvaro Lopez Miera and a special forces brigade, who were accused of “repression” and rights abuses linked to the protests.

The anti-government rallies erupted on July 11, seeing crowds take to the streets to protest the state’s response to the coronavirus pandemic and ongoing shortages of goods and medicine, some calling for an end to more than 60 years of communist rule. The demonstrations – which eventually spread to more than 40 towns, including the capital of Havana – were a rarity, with similar unrest not seen on the island in decades.

Cuban officials have accused Washington of inciting the protests, while President Miguel Diaz-Canel has claimed the US and its allies are leading a campaign of “media terrorism” to demonize his country. Havana has also pointed to a decades-long US blockade barring most trade with the island, saying it’s fueled the current crisis. Estimates from the United Nations suggest the embargo has cost Cuba some $130 billion since it was imposed in 1962, with the international body repeatedly calling on Washington to lift the blockade in resolutions going back to the 1990s.

Biden, however, insisted on Friday that the rallies are “a historic demonstration of the will of the people of Cuba,” adding that Havana “responded with violence and repression, mass detentions, sham trials, and people disappearing.”

In addition to threatening further sanctions, Biden said his administration is “pursuing every option available” to help Cubans obtain reliable internet access and “bypass the censorship.” Ahead of the White House meeting, a senior administration official said web access “should be treated as a human right,” and that the government is now working with private internet providers.

The president also vowed to expand assistance to “political prisoners and dissidents” on the island, and noted that the State Department would soon offer recommendations for how to “maximize the flow of remittances to the Cuban people, without the Cuban military taking their cut,” referring to payments sent to Cubans from US-based friends and relatives.