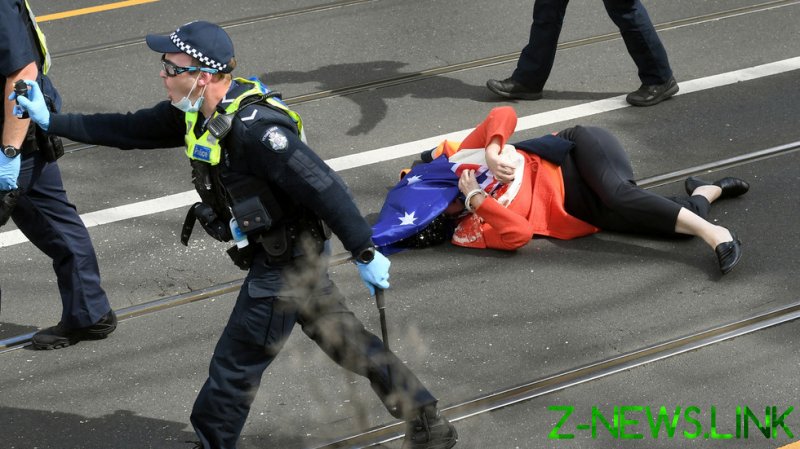 On Sunday, Ben Kew – the English editor of the conservative Florida-based publication El American – declared in an article that Australian Prime Minister Scott Morrison “must be made to pay for such flagrant human rights violations” that have taken place against protesters and other Australians through the use of strict Covid-19 lockdown restrictions.

“What has taken place in this former colonial outpost is neither normal nor acceptable. In fact, the behavior of the Australian government and its security apparatus has openly violated the most fundamental rights of its citizens,” Kew wrote, noting Australia’s development of a facial recognition app to keep people in quarantine, its prohibition of Australians leaving the country, and its policies that have kept tens of thousands of Australian citizens stranded abroad.

Kew called Australia’s new AUKUS pact with the US and UK, presumably struck against China, “ironic,” arguing that “the Chinese people currently have more [Covid-19] freedom than their Australian counterparts,” and argued that since Australia is supposed to be a leader of the free world, it should be held to higher standards.

Because of this, Kew concluded that Australia should receive “boycotts, diplomatic warnings, or even targeted sanctions” over its treatment of Australian citizens during the pandemic to show that “the free world will not stand by in silence” as human rights “are so aggressively undermined.”

Kew’s article received support from prominent US Republican groups and individuals, including Republicans for National Renewal.

The group, which is chaired by former Republican Congressman Kerry Bentivolio, shared the article on Twitter and called Australia’s actions “contemptible,” adding, “We should expect better from one of our closest allies.”

The article was also shared by conservative commentator Mike Cernovich, former congressional candidate Chuck Callesto, and Matthew Tyrmand – a fellow at the conservative Claremont Institute and the son of the late anti-communist Polish-American writer Leopold Tyrmand.

“Americans didn’t die for Australians in WWII so they could become slaves of a tyrant,” one American commented, while another called on the US to “Liberate Australia.”

Closer to home, Morrison’s government was also condemned by former Australian diplomat Bruce Haigh on Monday, who compared the country under Morrison to “Apartheid South Africa.”

“Australia is now as much on the nose as Apartheid South Africa, in Asia and Europe. Doors are closing,” Haigh warned, before calling on the government to release the Sri Lankan Murugappan family, who have been detained in Australia since they sought asylum in 2018.

On Saturday, Haigh warned that Australia was now “isolated in Asia and Europe” due to the AUKUS deal, which was opposed by neighboring countries China, Malaysia, and Indonesia.

“The region is angry with the Morrison/Dutton submarine decision,” Haigh revealed.