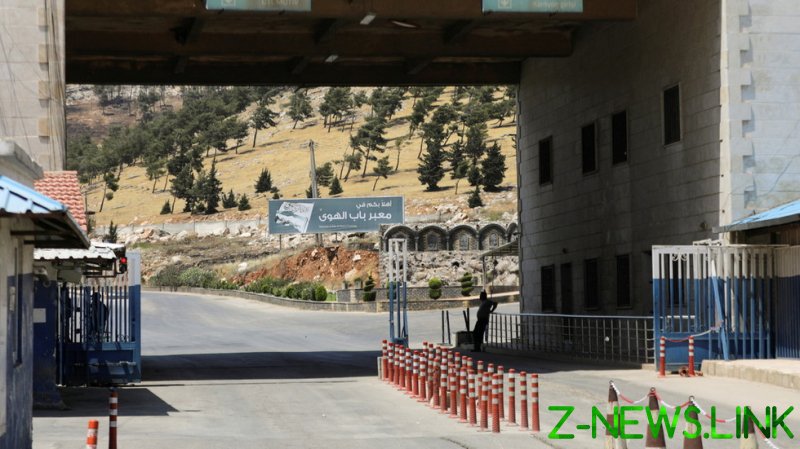 A diplomatic standoff is underway as the seven-year-long UN mandate to keep the Bab al-Hawa crossing point between Turkey and northern Syria open expires in July. The US and its allies, including Turkey, which has military presence in Idlib and maintains contacts with the local armed groups, are pushing for the crossing to remain operational for at least another year, citing concerns over civilians in the last terrorist stronghold in the country. But Syria’s main ally, Russia, threatens to veto the relevant UN Security Council resolution, insisting that all aid to the population should be channeled through Damascus.

Speaking to RT, Mekdad said Washington’s policy on cross-border aid was “pure hypocrisy.” Their efforts to keep the crossing operational are just “another attempt to help terrorist groups and to provide them with all necessary materials to prolong the terrorist war against Syria,” which has been ongoing since 2011.

Cross-border activities by the US and Turkey are a “direct violation of the sovereignty of our country,” Mekdad said, claiming arms are being sent to the militants as part of this “so-called humanitarian assistance.” He pointed to the presence in Idlib of Jabhat al-Nusra, an Al-Qaeda offshoot and UN-designated terrorist group.

Mekdad also slammed US sanctions on Syria. “If the Western countries are really careful about Syrian citizens, they should lift their sanctions…,” he said, adding that they “aren’t allowing us to even import medical instruments, not to mention foods and other necessary materials.”The “unilateral coercive measures” by the US and other Western countries “are killing the Syrian people” and some 95% of the population are affected by them, Mekdad added.

On Friday, US Assistant Secretary of State for Near Eastern Affairs Joey Hood said that Washington will maintain a “limited military presence” in the southern enclave of At Tanf and in the northeast of Syria in order to counter Islamic State (IS, formerly ISIS) and support their allies from the Kurdish-led Syrian Democratic Forces militia.

But Syria’s top diplomat reiterated the demand by Damascus for some 900 American troops to finally withdraw from the country.

“[The US] have to stop their infringement on the territorial integrity of Syria because they are illegally entering into Syria…they have to stop stealing Syrian oil, and Syrian wheat, and other Syrian property,” Mekdad continued, adding that without American support, “Daesh would have been eliminated a long time ago.”

Mekdad also said that Damascus was looking forward to the resumption of talks next month in Nur-Sultan, Kazakhstan aimed at a Syrian peace settlement.

The so-called Astana format – brokered by Russia, Turkey and Iran – is “the most effective mechanism” for finding solutions to the crisis, given that the negotiations are attended by the Syrian government, the opposition and international players that support each of the sides.

“Most recent positive developments in Syria have proven that the Astana format is the best format for finding a political settlement to the crisis,” the foreign minister said.