Home / WORLD / US promises NOT to charge Americans to fly out of Afghanistan after report of ‘$2,000 repatriation fee’ triggers outrage

US promises NOT to charge Americans to fly out of Afghanistan after report of ‘$2,000 repatriation fee’ triggers outrage 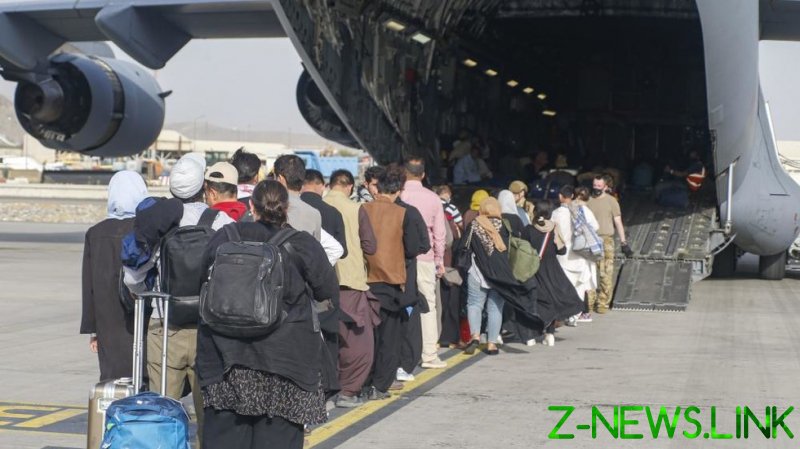 It is estimated anywhere from 5,000 to 10,000 American citizens, permanent residents and their family members may still be in Afghanistan, and presumably hoping to leave the country – under Taliban control since Sunday – via the Hamid Karzai International Airport (HKIA) in Kabul before the end of August.

Before they brave Taliban checkpoints and hope to get a seat on a US troop transport or chartered civilian jet, however, they must promise to repay the US government for the privilege of their rescue.

One journalist did some digging and found the website of the Overseas Security Advisory Council (OSAC), a State Department partnership with the “corporate, non-profit, academic, and faith-based groups.”

OSAC’s security alert for Afghanistan, posted on August 14 – the very day the Taliban took over Kabul from the disintegrating US-backed government – clearly states that “repatriation flights are not free.”

Passengers “will be required to sign a promissory loan agreement & may not be eligible to renew their US passports til the loan is repaid,” the advisory says, adding that the cost “may be $2,000 or more per person.”

The promissory note is apparently demanded in the Repatriation Assistance Request form, which is required for every single person hoping to get onto an evacuation flight, according to instructions sent out by the US embassy in Kabul – now operating out of HKIA.

Anyone hoping to leave will need to fill out the form and wait for the embassy email, before braving Taliban checkpoints to reach the airport, at which point they will have to hope a seat will be found for them on a departing plane on a first-come, first-served basis. Hand luggage only, no pets allowed.

Reached for comment, a State Department spokesperson told Politico on Thursday that US law “requires that evacuation assistance to private US citizens or third country nationals be provided ‘on a reimbursable basis to the maximum extent practicable’.”

“The situation is extremely fluid, and we are working to overcome obstacles as they arise,” the spokesperson added.

In these unique circumstances, we have no intention of seeking any reimbursement from those fleeing Afghanistan.

The Pentagon told reporters that as of Thursday, some 7,000 people in total have been evacuated since August 14. They could not say how many of them were Americans, or how many US citizens remain in Afghanistan.

Over 5,000 US troops are currently at HKIA, with no plan to send them into Kabul to retrieve Americans. They are expected to make their way to the airport on their own, past the Taliban checkpoints set up all around.

The troops’ primary mission appears to be to stop the crowds of Afghans from swarming the runway as they did on Sunday, some plunging to their deaths or getting caught in wheel wells while clinging to departing planes.

The war in Afghanistan – which the US invaded in October 2001, after the 9/11 terrorist attacks blamed on Al-Qaeda – and later in Iraq has cost the US at least $2 trillion, with interest on the debt used to finance them estimated at $6.5 trillion or more. Another $2 trillion will be needed to provide healthcare and benefits to some four million military veterans, according to the Costs of War Project .