Home / WORLD / US political discourse is so toxic & divided that friends of 30 years no longer talk to me. The America I loved has gone forever

US political discourse is so toxic & divided that friends of 30 years no longer talk to me. The America I loved has gone forever 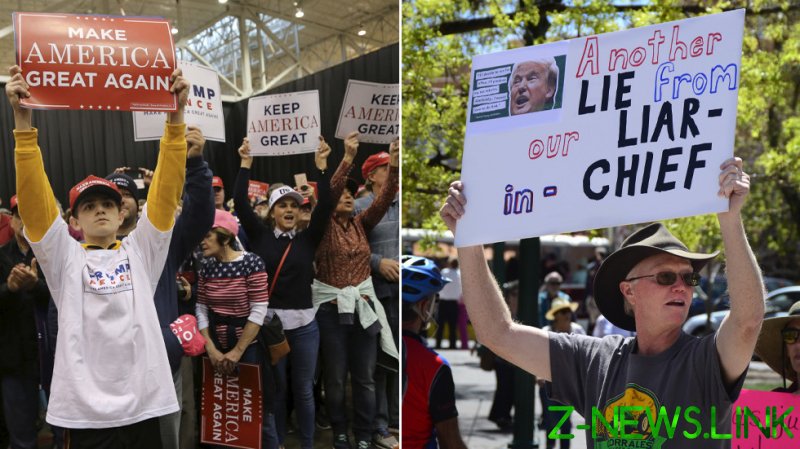 2020 has been one hell of a year. It included getting Brexit done, Covid-19, big-tech tyranny featuring extreme censorship by Twitter, Google, Facebook and Amazon as well as the stealth implementation of a social credit framework by Silicon Valley oligarchs as they plunder the economy under the diversionary power grab by pay-to-play politicians implementing quasi-permanent unlawful lockdowns. I’m sorry to say that the USA will become a banana republic.

In addition, the global economy is in the worst economic depression in history – one that will only deepen as unemployment rates skyrocket as we enter the last few months of 2020.

Well in the USA, we still have to deal with a presidential election and the appointment of Justice Amy Coney Barrett to the Supreme Court of the United States – two things that the left are fighting tooth and nail to stop.

Since Donald Trump was elected president of the United States in 2016, US politics have not only become highly toxic, they have also become radioactive. The swamp’s resist-everything Democratic Party, enabled by FBI bias and animus that was spun like a spider’s web by the feckless fake news media and echoed by Hollywood’s hypocritical perverts, made numerous attempts to stage a coup d’etat (carefully read the declassified letter below) of the democratically elected president. The CIA referred an investigation to the FBI that the Hillary Clinton campaign was colluding with Russia to impact the 2016 presidential election. The FBI lied to the FISA judges to spy on the Trump campaign, and no one was ever prosecuted. 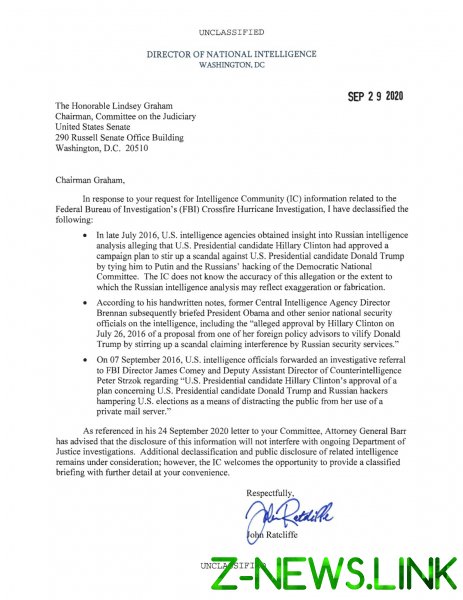 Why have FISA judges Collyer, Mosman, Conway and Dearie, who signed off on those warrants, and were lied to by the FBI to illegally obtain those same warrants to spy on a political opposition party during a presidential election, done nothing? Why have these Judges remained silent?  Is the entire system a stitch-up?

Now, the narrative has shifted at warp speed. It’s no longer about Russian collusion. The new narratives that matter are virtue signalling, identity politics, critical race theory, record hypocrisy and a dual justice system where murder,looting and arson are justified because those on the right are all Nazis and the radicalized left’s enforcers, ANTIFAand BLM thugs, are only “peaceful protestors.”

And nothing will interfere with this narrative. For example, the BLM mob influenced the prosecutors by getting them to charge BLM supporter Larynzo Johnson with “wanton endangerment” when he ran up to two police officers and shot them while rioting. Why was this blatant assassination rampage not prosecuted as attempted murder? Is the BLM mob now dictating charging decisions? Johnson’s attempted murder of police officers has quickly disappeared as it interferes with the media mob’s narrative.

The media have drummed these themes into the heads of the public and driven a wedge between family members, close friends and co-workers that has polarized America to the brink of civil war. Life has become so bad in the USA that many of my several decades-old friendships recently ended when they became unable to respect any individual opinion that differed from their own. That has happened to me. Friends for decades have been consumed by Trump Derangement Syndrome and are cancelling me.

For societies to evolve and flourish, we all need to accept other people’s viewpoints and continue open-minded, civil and respectful dialogue. In science, scientists always question everything; why shouldn’t we question everything in life without personalizing and demonizing those you disagree with? It’s become impossible to have rational fact-based discussions with these inflexible ideological zealots.

I just had a long conversation with Hudson, my friend’s son. He is 18 years old and is a popular American football playing, honour-list senior attending a private school in California. Hudson graduates this spring, and he hopes to be accepted and attend a college where he will play football. There are around 2,000 students in his private high school. From our conversation, I gleaned that most of Hudson’s teachers and the student population are very liberal and intolerant of anyone who has differing views.

What I found most shocking was how Hudson’s teachers “teach”. Today’s students are not educated; they are indoctrinated. By that, I mean “teachers” are only telling half-truths or half of the story, so any “conclusions” the students are allowed to reach on their own are based on inaccurate data. These teachers incorporate their bias into an indoctrination cocktail with a dash of critical race theory in order to get the students to conform to the teacher’s world view. Hudson explained how “the loudest students at school are liberal—I guess it’s over 98%.”

Regarding the comments Hudson reads on social media channels from his school friends, he says all are supportive of Joe Biden becoming the 46th president of the United States; none are supporting Trump. When I asked why, he responded, “Your life would be ruined, and you would not get into college.”

The intelligentsia has created a toxic environment of indoctrination where freedom of thought and speech is outlawed. The student “mob” will enforce the process of re-education, utilizing lies, propaganda, peer-pressure and fear of cancellation. No student or adult should be intimidated, bullied or harassed to the point of unwavering compliance. There is something systematically rotten in our educational system, and it needs to be purged of these radical ideologues. These are fascist tactics – USA-style.

That said, don’t expect things to improve anytime soon; in fact, COVID-19 will be used as an excuse to reset the economy. What does that mean? The oligarchs in Wall Street and in Silicon Valley will manipulate this election result, so Kamala Harris will be the de facto 46th president of the United States.

The Democrats have not been able to win at the ballot box, so a Joe Biden win will pack the Supreme Court with liberal judges, end the Electoral College, fully eliminate the filibuster, add states to the union ensuring the democratic party will have a permanent majority in the Senate, and will see the police defunded. Capitalism, democracy, the rule of law, liberty, freedom and free speech will come to a screeching halt under a Harris/Biden presidency where Joe Biden is simply ‘table meat’, or a ‘wet-lettuce.’

In the 29 September debate, Biden refused to answer any questions or lay out, for the American people, “his” policy plans, such as which radical judges will Harris/Biden pick to sit on the Supreme Court, whether he will stack the Court with liberal judges, whether he intends to abolish the Electoral College, whether he will really provide free healthcare to all illegal immigrants. Doesn’t this sound like Kamala Harris’s platform, rather than his?

The next two presidential debates will be cancelled by Biden’s handlers because democracy is dead, and he is an empty vessel for Harris’s far-left agenda that no one voted for. It’s the only way to subvert democratic process in this election.

If this electoral process seems like it is rigged and conservatives are screwed, it’s because that is the reality and tribalism is the new normal. The polls are completely and totally wrong. The huge silent majority are afraid to admit they are voting for Trump, so he will likely win the general election. However, the left’s intention to install President Harris (an Obama proxy) by hook or by crook will not go away and will likely spark a second civil war that brings the U.S closer to tyranny.