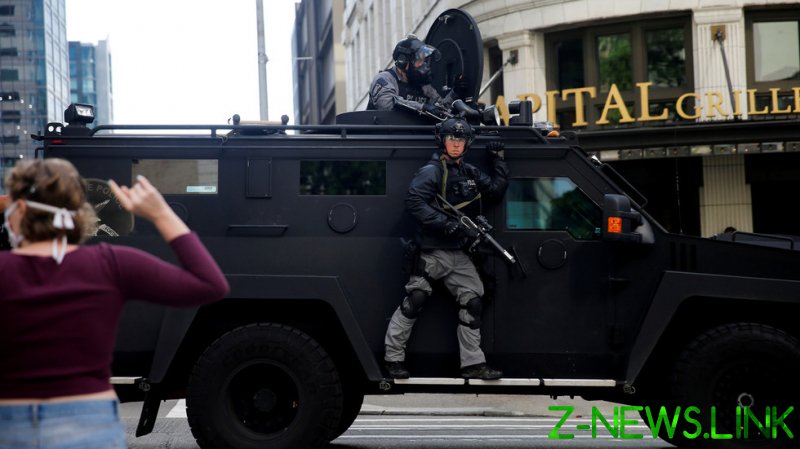 The bureaucratic shift in how sheriff’s offices and precincts justify their requests for military-grade vehicles under the Pentagon’s controversial 1033 Program was reported on Wednesday by the Huffington Post. The report is based on the outlet’s continued analysis of a trove of documents from the hand-me-down scheme that came into its possession earlier this year.

Local jurisdictions are increasingly citing extreme weather and other natural calamities in their applications, since Congress tweaked the program in its annual defense spending bill. Lawmakers instructed the DoD to give priority to “applications that request vehicles used for disaster-related emergency preparedness, such as high-water rescue vehicles” – a move that HuffPo describes as having “supercharged the incentives” to link climate concerns to military hardware.

On the Pentagon’s cue, local police and sheriffs suddenly started “to make a big deal out of their role in disaster response,” the report said.

Huffington Post acknowledged that military vehicles, “such as mine-resistant ambush protected vehicles, or MRAPs, can drive over fallen trees, withstand high winds, ford several feet of water and keep going at moderate speeds if their tires are punctured” – features which do make them useful in natural disaster response.

But in practice, such vehicles have also been used for rendering arrest warrants or to intimidate protesters. There is no reason to expect that those supplied supposedly for disaster relief would be used strictly for that purpose, the outlet predicted.

“I can guarantee you that none of these police departments putting climate or extreme weather down have emergency management plans to use it [that way],” Leigh Anderson, a Chicago State University researcher and auditor who oversees police departments in Illinois and Missouri, told Huffington Post.

There is also the issue of training – or the shortage thereof – that officers of the law receive to deal with natural disasters. “When it comes to natural disasters, officers are ill-prepared for anything that happens outside the normal police department happenings,” Anderson said.

The 1033 Program was launched in 1996 to funnel unneeded equipment from US foreign wars to domestic law enforcement. It resulted in a militarization of police forces across the US with disastrous results, according to critics.

Along with the gear, the police adopted heavy-handed military tactics born from military counterinsurgency missions and have become increasingly prone to using violence in situations that could be resolved peacefully.