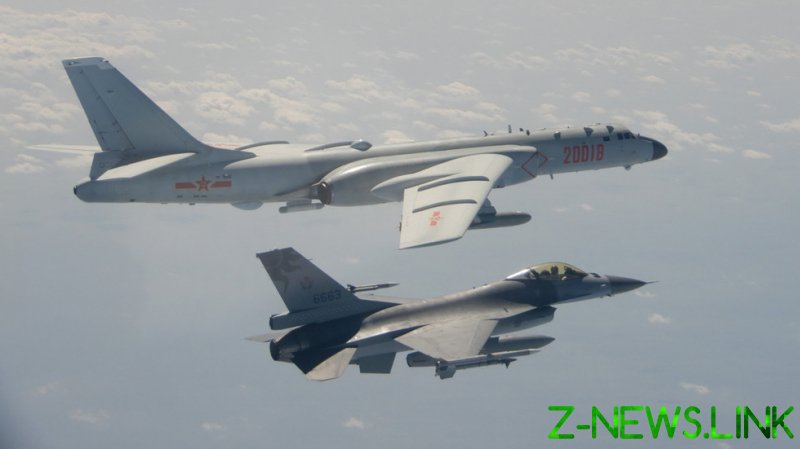 US State Department spokesperson Ned Price demanded that Beijing “cease its military, diplomatic, and economic pressure against Taiwan,” and engage in “meaningful dialogue” with Taipei instead.

“We will continue to assist Taiwan in maintaining a sufficient self-defense capability,” the statement said. “Our commitment to Taiwan is rock-solid and contributes to the maintenance of peace and stability across the Taiwan Strait and within the region.”

According to the South China Morning Post, military aircraft from mainland China fly near Taiwan on a near-daily basis, but the flybys usually involve just one or two reconnaissance planes.

Taiwan has remained a contentious issue between the US and China, which claims the island as its territory. Washington significantly stepped up diplomatic support for Taipei during the Donald Trump administration, and greenlit several major arms deals with the country, including the sale of jet fighters and coastal anti-ship missile systems. Last year, the US adopted a law aimed at encouraging other countries to strengthen ties with Taiwan.

Beijing says Washington’s policies towards Taiwan undermine the ‘One-China policy’ and pose a threat to peace and security in the region.

“We will never allow anyone or any force to stand in the way of national reunification or to meddle in China’s domestic affairs with Taiwan as a pretext,” Chinese Foreign Ministry spokesperson Zhao Lijian said earlier this month.

He added that actions that “harm China’s core interests are futile and will be met with resolute responses.”