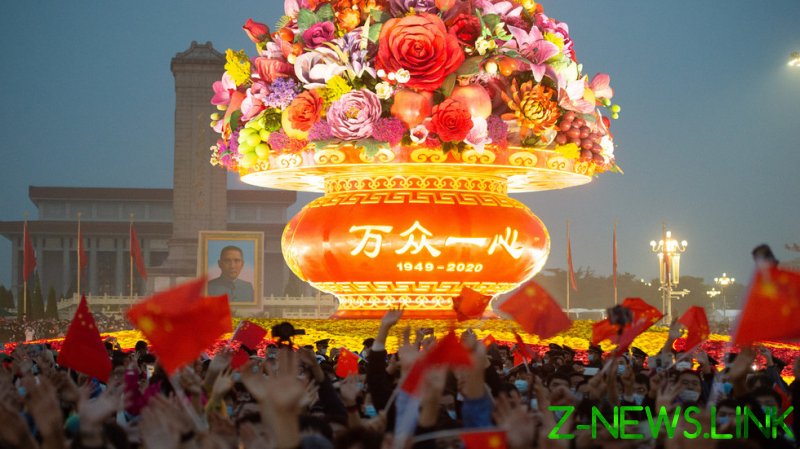 The 70-page document called “The Elements of the China Challenge” was prepared by the State Department’s Office of Policy Planning and published by Axios on Tuesday. The plan goes along the lines of the “Long Telegram,” a 1940s foreign-policy blueprint authored by then-US ambassador to the Soviet Union George Kennan, who described the country as “impervious to logic of reason” but “highly sensitive to logic of force” and advocated its containment.

“The Elements of the China Challenge” is full of conservative undertones and promotes American exceptionalism, but doesn’t fully go into the realm of the “clash of civilizations.” That framing was noticeably voiced by the former head of the Office of Policy Planning, Kiron Skinner, who’d initially led the work on the plan. Last year she compared her country’s competition with the USSR to the unfolding rivalry with China, saying the former was “a fight within the Western family” while the latter is “striking” in the sense that “it’s the first time that we will have a great power competitor that is not Caucasian.”

The new State Department paper says it was time to dispel “the starry-eyed optimism about [China] that has distorted US policy” towards it for many years. Washington should consider China a threat to “established world order,” driven by “a distinctive blend of Marxism-Leninism and … an extreme version of Chinese nationalism” of the ruling Communist party.

It says China by nature has inherent weaknesses, including constraints on innovation, difficulties in forming alliances, demographic imbalance, environmental degradation, persistent corruption and the costs of maintaining order at home, or, as the document describes it, “monitoring, censoring, and indoctrinating 1.4 billion people in China.”

There is also “the illness, death, and social and economic devastation wrought worldwide by the Covid-19 pandemic born in Wuhan,” which, according to the State Department, has led to international anger over Beijing’s “contempt for human life, indifference to other nations’ well-being, and disregard for international norms and obligations.”

The document stresses that Washington blames China’s leadership rather than the Chinese culture. “Freedom and democracy” can flourish in China “as they do in Taiwan and South Korea, and did in Hong Kong,” it says.

Tackling the “China challenge” will require a “multi-pronged approach” that “will enable the United States to secure freedom” at home and for the rest of the world. The State Department lists ten points of action necessary to contain China.

At home Washington needs to “preserve the constitutional order,”“foster a growing economy based on a free market” and “cultivate a vibrant civil society.” It needs to “maintain the world’s most powerful, agile, and technologically sophisticated military” to protect America’s commercial interests.

There is also lots of education to be done, both to have a competitive edge in science and technology and to create a cadre of specialists in Chinese studies. American diplomats, military strategists, economists, technologists and political theorists “must be well-versed in the country’s language, culture, and history,” the document says, implying a shortage of China expertise in the US.

American people also need to be taught about the Chinese threat, because “only an informed citizenry can be expected to back the complex mix of demanding policies that will enable the United States to secure freedom.” Education will “enable students to shoulder the enduring responsibilities of citizenship in a free and democratic society and to meet the special demands” of a modern economy.

Internationally, ‘Elements of the China Challenge’ says the US needs to reevaluate “its alliance system and the panoply of international organizations.” Allies (“the world’s democracies and other like-minded partners”) will be required to sign up to a more efficient sharing of responsibilities. International organizations will need to be reformed “where possible” and pushed aside “where necessary” by new ones built by the US.

The US will still have to cooperate with China simply because of its economic might, but one of its primary goals is to “eliminate dependence on China for critical materials and goods” for itself and for its allies.

The leaked paper fits the logic of “great power competition,” which became the focus of the Trump administration’s foreign policy but can be traced back to the “pivot to Asia” of his predecessor, Barack Obama. The need for a perception of America as a force uniquely predisposed to govern global affairs also enjoys a bipartisan consensus in Washington.

The US sees China and, to a lesser degree, Russia as “revisionist” nations trying to dismantle the post-Cold War unipolar world. Washington accuses them of authoritarianism and accuses them of various misdeeds, like suppressing dissent at home, fostering corruption in other nations to take advantage of them, military adventurism and others.

Both countries actually advocate multilateralism and a right of sovereign nations to adopt political systems that they see as better suited to their cultures and needs. They say the criticism is just part of the US effort to keep up with the competition by using political clout after failing to win economically.