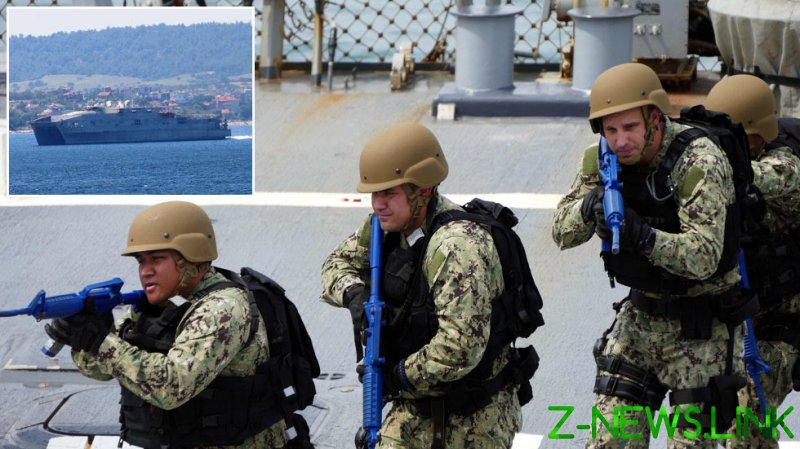 According to commanders, the US Naval Ship Yuma, a Spearhead-class expeditionary fast transport craft, “began its northbound transit into the Black Sea to operate with our NATO allies and partners.” The twin-hulled catamaran is able to transit a whole company of US Marines and is equipped with both a flight deck and a ramp to allow armored vehicles to rapidly roll into battle.

The Yuma will take part in the colossal ‘Sea Breeze’ exercises along with personnel from 32 separate nations, including Ukraine, the UK, France, Poland, Georgia, Senegal, South Korea, Pakistan, Japan and Morocco, among others.

Moscow has said the drill poses a real risk for potential escalations in military tensions. Last month, its diplomats called on the US to refrain from participating, saying that “the scale and aggressive nature of the ‘Sea Breeze’ exercises in no way helps with the real challenges of ensuring security in the Black Sea region.”

According to the envoys, the NATO drills will “increase the risk of unintentional incidents” and simultaneously “encourage militaristic sentiments in Kiev.” A spokesman for the US Sixth Fleet had previously said that Washington is “proud to partner with Ukraine in co-hosting the multinational maritime exercise.”

The drills have been run in previous years, but the current iteration comes amid significant tensions between NATO and Russia. Two weeks ago, a British warship, the HMS Defender, sparked a diplomatic incident when it crossed the border into waters around the disputed Crimean peninsula.

Russia, which considers the region to be an integral part of its sovereign territory, responded with aerial fly-bys and warning shots from a nearby warship. London refuses to recognize Russian sovereignty over Crimea and insists the waters belong to Kiev.