‘US obliterating what little history they had’: Toppling of Gen. Robert E. Lee’s statue polarizes Americans 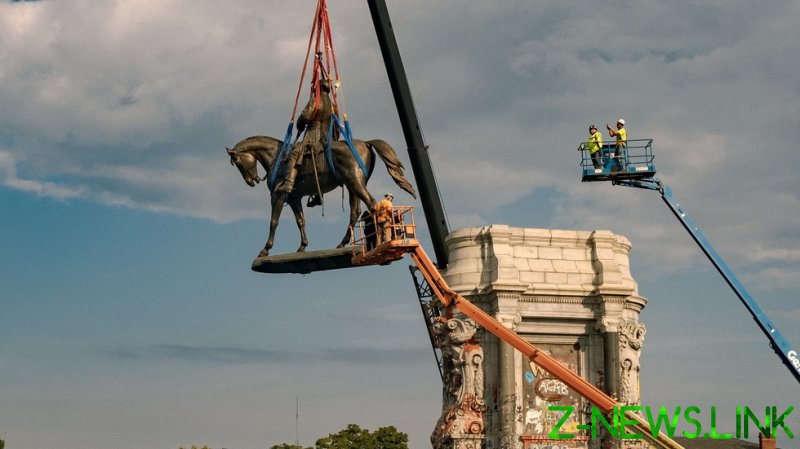 The dispute over the fate of General Lee statue reached its climax early on Wednesday morning, when municipal workers turned up on Richmond’s historic Monument Avenue with a cherry-picker. As they were removing the statue from its graffiti-covered podium, the debate over whether it was the right move raged on.

Lee, described in the history books as a skilled leader, was the commander-in-chief of the Confederate States army during the American Civil War, leading the Army of Northern Virginia until its surrender in 1865. The general also had an objectively darker side, inheriting slaves, to whom, according to some documents, he was cruel, encouraging their overseers to beat them. However, in a seeming contrast to his reputation, he opined in a letter dated 1856 that slavery was “a moral & political evil,” and that God would ensure their emancipation.

Reaction online to the removal of the general’s statue has been mixed, polarizing an America already divided on the issue of how to deal with the legacies of controversial historical figures. While some have taken delight in the toppling of the Confederate leader’s monument, others have claimed the US is destroying what little history it has.

Comedian Erich McElroy took to Twitter to delight in the news. He said that, as a school student, he had read Lee’s biography, which had made him out to be a great general who had suffered misfortune. “The propaganda campaign about the confederacy has lasted far too long. Good riddance, General Lee,” he wrote.

Other commenters concurred, one claiming the statue’s removal was long overdue, but that “the resentment, hate, contempt, and white racism will remain.” Another added that “Southern thinking” had been what lost the Confederates the war. One poster said there was “so much blood on Lee’s hands.”

The founder of the local Black Lives Matter chapter, Lawrence West, welcomed the move, telling CNN on Tuesday that the impending action would be “very satisfying and gratifying.” He claimed the 12-ton statue was “very symbolic of the Confederate mindset … the levels of oppression that [black] people feel on a regular, day-to-day basis.”

But the euphoria wasn’t universally shared. Some saw the statue’s toppling as an attempt to destroy history, rather than learn from it. “The US [is] obliterating what little history they had!” one critic wrote on Twitter.

Robert Poll, of the British campaign group Save Our Statues, tweeted, “Lee had more dignity in his little finger than this guy on the cherry-picker will ever have,” describing the event as another milestone in the destruction and rewriting of American history.

One commenter exclaimed, “The book burners are winning!” while another insisted history needed to be heeded to ensure grave errors weren’t made again. “Removing statues will not change anything,” he added.

Others suggested the statue’s removal pandered to the protesters who had covered it in graffiti during the demonstrations that followed the death of George Floyd in 2020. It was allowing the “elites to destroy a historical taproot to steal our memories and rob us of our identity,” he argued.

In July, the removal of a statue of Lee in nearby Charlottesville similarly polarized the local populace. Some 168 Confederate statues, monuments, and symbols were taken down in the US last year alone, with more removals planned in 2021.