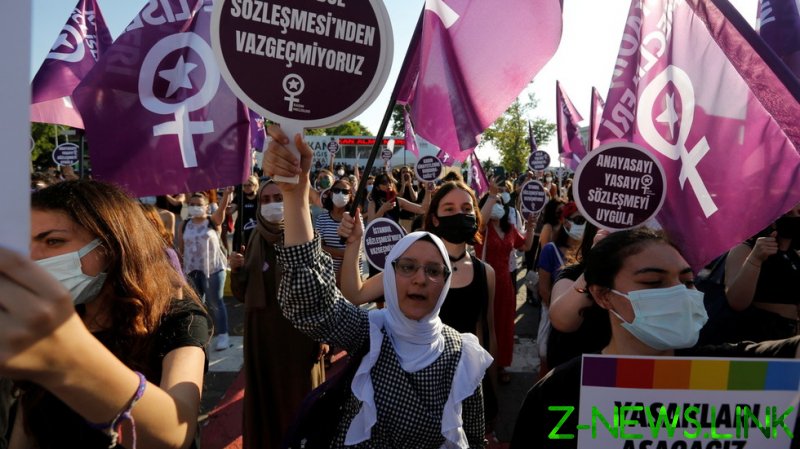 Erdogan’s Turkey has long been something of a thorn in Washington’s paw, given its ongoing refusal to buy inferior US military equipment (it was booted from the US’ F-35 program for insisting on buying Russian S-400 missiles, making the Americans who still store their nukes at Incirlik somewhat nervous), its refusal to place the good of Israel above its own benefit, and its rumblings of discontent regarding the US’ pleas for support (or at least safe passage) to its Syrian ‘moderate rebel’ militant groups, which Ankara considers to be little more than terrorists.

Under the government of President Recep Tayyip Erdogan, Turkey has become quite recalcitrant indeed, far from the ideal domesticated state keen to babysit American nukes and stage American missiles in exchange for coveted membership in the deteriorating NATO structure (not long ago fetchingly described by French President Emmanuel Macron as “brain dead”). Clearly what it needs is a shot in the bottom from that great big needle marked ‘Democracy’ – and who better to deliver that than the good old boys from the Project for a New American Century, many of them the old same men who led and lied the US, blindfolded, into the chaos of Iraq.

Enter the Turkish Democracy Project, a non-profit organization which – it should be clear from the name – has nothing to do with democracy or, really, Turkishness. The group’s website is about as subtle as a nuclear bomb, blaming President Recep Tayyip Erdogan for “dramatically alter[ing] Turkey’s position in the international community and its status as a free and liberal democracy” and calling for “a nonprofit, non-partisan, international policy organization that opposes its destabilizing behavior, supports genuine democratic reform, and holds the forces of corruption and oppression within Turkey to account.” In other words: “We want a piece of your country. Resist and be annihilated.”

It’s not that the US thinks Turkey is stupid. But they believe, and are likely correct, that the US will never have as good a time as now to strike. With its military still feared by many parts of the world (even though its bark is at this point far worse than its bite, and its image still suitably ferocious to put much of the actual war-fighting business to fleeing instead of fighting), the main business must be – if the US expects to do something other than flee home with its tail between its legs – “shock and awe.”

But given that these shock and awe tactics will be taking place in the Middle East, an area which has seen the worst the US can throw at its enemies over the last 20 years of perpetual warfare and realizes all the money in the world can’t give even the largest military on Earth the stamina of the gods, it’s likely these dyed-in-the-wool bloodshed-artists will have to change with the times. To invade a militarily competent nation like Turkey – especially one which, inconveniently, happens to be backed by NATO – is unlikely to be a walk in the park, no matter how many phony war crimes the PNAC crew manage to cook up. Gas attacks have become cliche, and any talk of “weapons of mass destruction” will elicit a chortle at best.

So the TDS, if recent events are any indication, has instead gotten to work with the kind of color revolution-style events that have largely replaced shock and awe in other regime-change hotspots. They’re cheap, they’re easy, and in this case – a protest in Istanbul against Turkey’s withdrawal from the Istanbul Convention? – they require exactly zero imagination. It’s much easier to con the rest of NATO if you don’t have to make them think.

Thousands of activists took to the streets on Thursday, either on their own or hailing from various NGOs, denouncing Turkey’s withdrawal from the European human rights treaty known as the Istanbul Convention. Erdogan’s executive order removing Turkey from the treaty, first adopted back in March, argued the country’s women are protected by domestic laws rather than the international human rights treaty – which he argued had been “hijacked” by the LGBTQ+ community.

The hoary old PNAC boys behind the TDS likely couldn’t believe their luck when something like this fell into their lap. But will they be able to modernize?

The group’s CEO is Mark Wallace, who’s also the CEO of United Against Nuclear Iran – another unsubtly named regime-change operation (and a regime change that has failed repeatedly). An old hand at overthrowing Middle Eastern nations the old-fashioned way, Wallace held several positions with the George W. Bush administration while the nation was attempting to crush Iraq (apparently shocked the children had run forward with IEDs instead of handfuls of wildflowers to welcome their new rulers).

Indeed, numerous fellow veterans of the Iraq regime change effort and abortive attempts to overthrow Iran have bubbled up in the swamp gas to give regime change in Turkey a go. Wallace is joined by other bottom-feeders like former Connecticut senator Joe Lieberman and UANI intel chief Norman Roule, as well as glorified mustache-carrier, would-be thug, and former Trump national security adviser John Bolton. Former Bush adviser Frances Townsend is there, as is former associate deputy director of operations for the CIA (and Blackwater vet) Robert Richer. At least a few members of the shadowy pro-Israel Foundation for the Defense of Democracies were listed and then memory-holed, and Bush’s brother Jeb is there, a speech bubble forever hovering above his head reading “please clap.”

Oddly enough, however, the only currently listed actual employee aside from CEO Wallace is a (presumably) former assistant English professor at Princeton University. No, that’s not suspicious at all. Carry on, I’m sure Turkey will welcome you (and your desired partitioning of the country) with open arms!

With Erdogan still trustingly paying his country’s NATO dues, Ankara is unlikely to expect any sort of real attack, though the leader is likely on guard, given former President Trump’s on-again, off-again announcement to clear out US soldiers from Syria. He is likely to be on the lookout for foreign meddlers among the protesters, however. And Erdogan’s allies with their ears to the ground both inside and outside Turkey have already pegged this absurd attempt at bringing back ‘democracy’ for what it really is. While some have linked it to the infamous Gulen movement, referring to the cleric who most recently was accused of trying to overthrow Erdogan in 2016, Gulen’s movement itself seems to have ties to the same ‘Greater Israel’ plan to redraw the lines on the map of the Middle East, a plan Israeli military strategist Oded Yinon devised decades ago (and which the neocons appear to have used as their foreign policy guide ever since). Former Turkish opposition lawmaker Aykan Erdemir, senior director for Turkey at the FDD, was accused of being connected to Gulen in 2017 and had his assets seized, strengthening the case for the connection between Gulen’s organization and the notoriously pro-Israel FDD.

But with all of NATO’s heads turned to this human rights drama, surely the other countries in the alliance also participating in the drawing-and-quartering of Syria won’t expect a military attack on Turkey as well – not without some warning. The map of Greater Israel shows Turkey losing a mere corner of their land compared to Syria, which takes quite a beating – one which Turkey clearly expects to be a part of, having already staked its claim effectively to certain border regions of Syria under the logic of keeping the Kurdistan Workers’ Party (PKK) away. But this is all temporary, and eventually the region must settle into its new form. An Israel-first arrangement will not go down well with any of the other combatants, and, unlike the US and its European partners, Turkey won’t just sit on its hands and sigh wistfully while its share of the Syrian pie is handed to the US by way of Tel Aviv.

Because that’s who the ultimate beneficiary of this mess is supposed to be. Named after the Israeli military strategist who devised it, the Yinon project hopes to balkanize the Middle East and assemble the shards into a single nation consisting of the choicest morsels of those countries in between the Euphrates and the Nile rivers. Iraq has already been cut in half, Syria has shrunk dramatically even as the war goes on, and Egypt is run by a pliant leader who will do what the US and Israel tell him – as General Wesley Clark said over a decade ago, the plan was to take out seven countries in five years. They’re running a bit behind, but never underestimate the abilities of a bunch of old war criminals with nothing to lose.