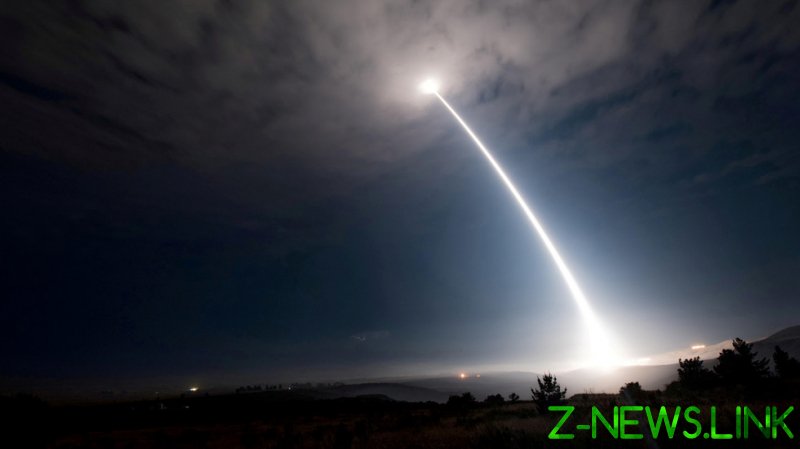 The US Senate recently passed the 2021 National Defense Authorization Act (NDAA), allocating some $1.5 billion for research and development of a new generation of intercontinental ballistic missiles (ICBM) known as the Ground Based Strategic Deterrent (GBSD).

The funding of the GBSD occurred despite pressure to divert some or all of the current allocation to support emergency Covid-19 contingencies. One of the major factors behind the decision was a concerted effort on the part of the US Air Force and the commander of US Strategic Command to convince Congress that a failure to fund the GBSD would be tantamount to unilateral disarmament, given that the current US ICBM force, comprised of Minuteman III missiles, will begin “aging out” as the missiles reach their operational expiration dates.

The proponents of the GBSD, however, have a major policy hurdle before them – namely the desire on the part of President Joe Biden to undertake a review of the current US nuclear posture with the view of breathing new life into strategic arms control negotiations that could potentially reduce the size of the US nuclear arsenal.

Many arms control advocates believe that the logical choice for any significant reduction in the US strategic nuclear arsenal would be to do away with ICBMs altogether, eliminating the need for the GBSD. The supporters of the GBSD believe such a move would put the US in danger by increasing the risk of a nuclear attack by limiting the number of targets any potential nuclear foe would need to strike in an effort to preemptively neutralize the US nuclear deterrent.

There is an urgency in this debate driven by two hard-wired calendar dates. The first is the expiration of the recently extended New START treaty.

While the US and Russia agreed to extend this treaty by five years, the fact is this treaty will expire for good come February 2026, leaving the two nations a scant five years to negotiate a follow-on agreement. The other hard date is in 2030, when the Minuteman III ICBM force will begin aging out.

The current GBSD funding authorization envisions the deployment of a fully operational replacement missile by 2029, but this is contingent upon continued funding at ever-increasing levels in the years to come. If a commitment is made to continue fully funding the GBSD with an eye on operational deployment by 2029, it will handicap US arms control negotiators who will have zero flexibility when it comes to devising a negotiating strategy capable of convincing their Russian, and possibly Chinese, counterparts to agree to meaningful cuts in their respective nuclear arsenals.

Land-based ICBMs have been a critical part of the nuclear Triad that has underpinned the US nuclear deterrence posture since the 1960s (the other two components being manned bombers and submarine-launched ballistic missiles, SLBMs.)

Today the US maintains a force of 450 hardened missile silos containing 400 Minuteman III ICBMs scattered across Montana, North Dakota, Colorado, Nebraska and Wyoming. This force has been designed to respond on short notice to any nuclear attack. But its most important characteristic today is its role as a warhead “sponge”. Any potential nuclear-armed foe would need to allocate at least two nuclear warheads to each silo to have any chance of destroying the Minuteman III force. The only nation capable of carrying out such an attack today is Russia, which would have to allocate 900 of its 1,600 deployed warheads to have any chance of taking out the US ICBM leg of the nuclear Triad.

Supporters of the current nuclear Triad contend that without the land-based ICBM “sponge”, any potential foe would only need to focus on attacking five targets in the US—three strategic bomber bases, and two submarine bases. These same experts note that the pressure on the most survivable and lethal component of the Triad – the SLBM – will increase as force restructuring limits the number of submarines that are on patrol at any given time, and as new possible technologies emerge that can detect submarines more easily, increasing the chances that some or all of the deployed SLBM-carrying submarines could be preemptively targeted. Only by retaining the land-based ICBM, these experts argue, can the US guarantee a high degree of certainty that any nuclear attack against the US or its allies would result in a massive retaliation that no aggressor could hope to survive.

The Minuteman III missile has been in service for more than 50 years, despite being designed to last ten. It has achieved this level of longevity through a series of service life extension programs (SLEP) which, in their aggregate, have resulted in a missile very different from the one originally deployed, possessing upgraded booster rockets, new avionics and guidance systems, and more modern nuclear warheads. But the current fleet of Minuteman III ICBMs will begin to expire beginning in 2029, when many of the upgraded rocket boosters expire, followed by the guidance systems, which will begin to expire in 2031. If nothing is done to extend the life of the Minuteman III missiles, the arsenal of operational missiles will be reduced to 350 by 2033, and less than 100 by 2037.

Proponents of the GBSD argue that the fifty-year lifecycle costs associated with fielding a new ICBM, estimated at $159.2 billion, are actually cheaper than the fifty-year lifecycle cost of a new Minuteman III SLEP, with a baseline cost of $160.3 billion. They also point out that the GBSD costs go beyond simply putting a new missile in the ground, but also incorporate silo refurbishment and other ground infrastructure improvements, including a new nuclear command and control system designed to survive in a modern environment where cyber attacks are a real possibility. The new GBSD also incorporates a modular design that allows for rapid-retargeting, and flexibility when it comes to the payload carried, allowing for the introduction of new, improved delivery systems.

The scenario painted by the supporters of the GBSD is based upon an all-or-nothing approach—either spend the money of a new ICBM or lose the ground-based leg of the nuclear Triad forever. This logic mitigates both against the loss of ICBMs, and for a newer, more capable missile (the GBSD.) But it also ties the hands of arms control negotiators trying to come up with a formula that would result in the reduction of Russian and Chinese nuclear arsenals. By keeping the US nuclear Triad intact, and by deploying a new, more capable ICBM in the form of the GBSD, the US would eliminate any incentive on the part of either Russia or China to reduce the size and capability of their respective nuclear arsenals. Indeed, the exact opposite would happen—Russia would continue its current nuclear modernization programs, and China would have every reason to invest in enlarging their own ICBM force.

Moreover, there is virtually no chance that the US would unilaterally disarm its ICBM force by allowing the Minuteman III ICBM to age out without a replacement. The solution to this quandary is how to best manage the US ICBM force in a manner that retains the potential for viable force retention while keeping the door open for the possibility of elimination through new arms control agreements. In this light, the GBSD is the least favorable option, as its funding cycle calls for the production of some 650 new missiles sustained over the course of fifty years. Once this production level is funded and underway, it will be virtually impossible to stop it from reaching completion.

However, the US could seek to extend the life of the existing Minuteman III ICBM force, and then use arms control negotiations as a way to leverage their continued existence as a means of getting the Russians to agree to meaningful reductions in their own arsenal—the heavy Sarmat ICBM comes to mind.

Similar trade-offs could be negotiated with the Chinese, with a reduction/elimination of the US ICBM arsenal offered up in exchange for China agreeing not to field any new generation ICBMs. These negotiations, if they are to have any chance of success, must be concluded in the next five years—a very short time frame when it comes to arms control negotiations. The flexibility afforded by a Minuteman III SLEP would enable and enhance these negotiations, while an irreversible commitment to fund and deploy the GBSD would guarantee their failure. Seen in this light, there really isn’t much of a debate. The key question is who will prevail in the future internal US debate over nuclear force posture—the advocates for a continuation of the nightmare of nuclear deterrence predicated on mutually assured destruction (a self-fulfilling prophecy if there ever was one), or the proponents of meaningful nuclear disarmament through viable and verifiable arms control agreements.