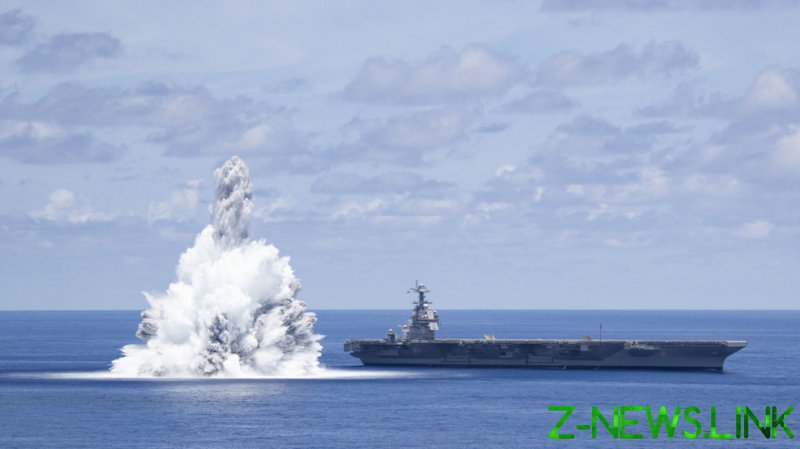 The US Geological Survey reported the 3.9 magnitude tremor on Friday, after the Navy’s second shock trial for the USS Gerald R. Ford, a $13 billion warship and the latest aircraft carrier to be introduced into the American fleet. The blast was detonated about 100 miles off of Florida’s Flagler Beach.

The shock trials got underway last month to test the Ford’s combat readiness, with the first round employing a 40,000-pound explosive on June 18. That “experimental explosion” also registered 3.9 magnitude, the equivalent of a small earthquake, according to the USGS. The Navy shared footage of the first blast, though has offered few details on the trials since.

Formally commissioned in 2017, the USS Gerald R. Ford is the world’s largest aircraft carrier, the first in a new class of ships meant to replace the US’ aging fleet of Nimitz-class carriers. Despite its status as one of Washington’s most advanced warships, the multi-billion dollar boat – the most expensive warship ever built – has seen a number of issues and delays in its short lifetime. In 2019, more than two years after it was commissioned, nine of the ship’s weapons elevators were not operational – leaving the Ford’s crew unable to move ordinance up to deck – while an earlier Pentagon report found a number of systems were of “poor or unknown reliability.”

Even with its shock trials underway, four of the vessel’s weapons elevators still remain broken, despite assurances from Rear Admiral James Downey, the Navy’s program executive officer for aircraft carriers, that the issues would be sorted out by April. With the elevators still not working as of June, the Ford was forced to begin the tests as an incomplete ship, missing a rare opportunity to face real-world conditions fully intact.

A Navy spokesperson said in May that the elevators would have to be certified after the shock tests, but nonetheless noted they would be “in an appropriate material condition to safely conduct full ship shock trials.”

In addition to technical issues and cost overruns associated with it, the project has faced criticism from environmentalists, arguing that the explosions would imperil marine life despite the Navy’s assurances that the effect would be minimal.

While the military maintained that the tests would be conducted “within a narrow schedule that complies with environmental mitigation requirements” – and also tasked a special team to study potential effects on marine wildlife – some activists say the size of the blasts could inflict damage on the environment, such as Michael Jasny of the Natural Resources Defense Council (NRDC).

“The Navy’s own modeling indicates that some smaller species of marine mammals would be expected to die within 1-2km of the blast, and that some marine mammal species would suffer injury including hearing loss out to 10km of the blast. That gives some sense of the power of the explosives we are talking about,” he said of the 40,000-pound bomb used in the first trial.

Jasny described the exercises as a “black box” due to the lack of information released by the Navy, arguing “We don’t know how conscientiously the blast site was chosen, and we don’t know how effective the monitoring was before the detonation, so it’s hard to put a great deal of faith in the safety of marine life.”

According to Tom Douglas, the environmental impact director for the shock trials, the Navy typically spends between three to five years to prepare for such tests, and began planning for the USS Gerald R. Ford’s back in 2016.

The Navy’s record on preserving marine wildlife is less than stellar, however. The branch has been taken to court by the NRDC and other groups repeatedly since the early 2000s, in several cases over its use of low-frequency active sonar, which can produce “dangerous levels” of noise underwater, the NRDC said. In a July 2016 decision, a federal judge ruled the Navy’s use of the technology resulted in the “systematic underprotection of marine mammals” throughout “most of the oceans of the world.” Previous rulings also saw courts restrict underwater detonations in certain areas due to the harm posed to marine animals.