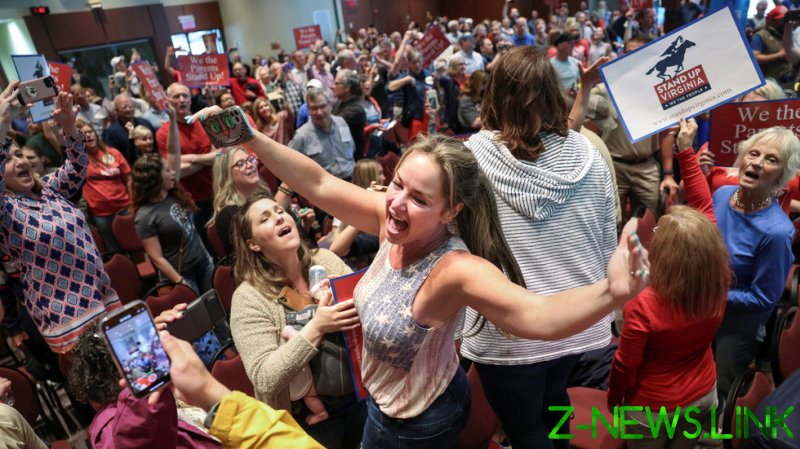 At a Loudoun County School Board meeting last week, a mother revealed that she had pulled her children from the county’s public school system after her six-year-old daughter asked her last year if she was “born evil because she was a white person.” The child had apparently learned this in a history lesson taught at her former school.

Video of the incident was widely shared over the weekend. It showed the unidentified woman accusing the Loudoun County Public School (LCPS) board of allegedly forcing its “uncompromising political agenda” on parents. Claiming that the board was “[destroying] our schools,” she called on its members to resign over a series of recent scandals.

In August, the LCPS board enforced policy proposal 8040 – a directive that requires district schools to affirm the preferred gender of students by calling them their chosen pronouns and allowing them access to gender-restricted areas, such as locker rooms and bathrooms.

Last week, students at Broad Run staged a walkout to protest the school board’s policy as “enabling” behavior. At a previous school board meeting last month, an angry parent said the policy was “rushed through to a vote without consideration for the safety of all students, simply to satisfy a liberal agenda.”

A series of contentious school meetings in recent months has laid bare the tensions surrounding the policy, which has seen at least one teacher resign after refusing to “push highly politicized agendas” on students. Another teacher who refused to abide by the policy on account of his religious beliefs was suspended by the board, but a court later ordered his reinstatement on First Amendment grounds.

Meanwhile, the National School Board Association (NSBA) appeared to smear the first victim’s family and other concerned parents as “domestic terrorists” in a controversial letter to the White House that requested FBI involvement after alleged threats to LCPS board members. After criticism from some 20 state school board associations, the NSBA partially apologized for the letter, blaming renegade leaders and expressing remorse at “some of the language” it used.

But the debate over schooling in Loudoun County is not limited to trans issues. Critics of the board are accusing it of adopting ideology-driven agendas, like shaping the curriculum in line with CRT. The LCPS board has denied embracing the highly controversial view of American history and society, which states that the country was founded on institutionalized racism that needs to be dismantled.

Although school board member Beth Barts is expected to step down on Tuesday, after announcing her resignation last month, parents and other critics have repeatedly called on LCPS Superintendent Scott Ziegler to resign.

In May, Ziegler emailed the school board about the sexual assault at Stone Bridge High School, but claimed at a June school board meeting that the “predator transgender student or person simply does not exist” and that there was not “any record of assaults occurring in our restrooms.” He later apologized but insisted there was no cover-up.