Home / WORLD / US media continues to try to link Trump to Kremlin, but in reality American Republicans have more in common with Putin’s opponents

US media continues to try to link Trump to Kremlin, but in reality American Republicans have more in common with Putin’s opponents 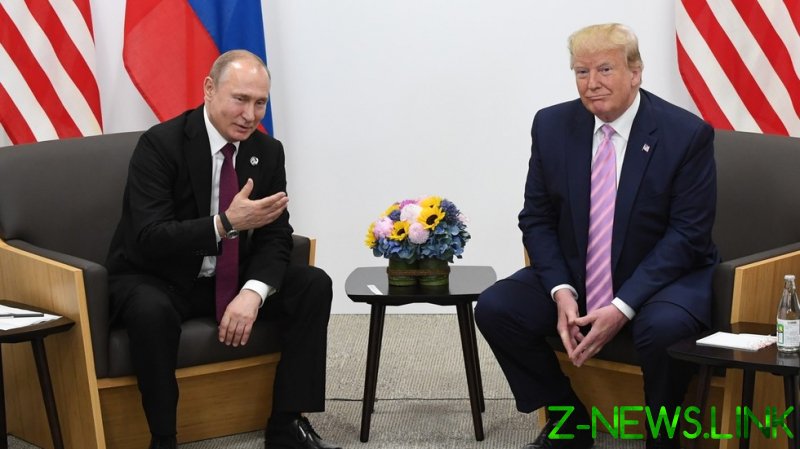 As the American House of Representatives completes impeachment proceedings against President Donald Trump, efforts continue apace to blame the divisions in American society on Russia and its president, Vladimir Putin.

Speaking to the press a day after a mob seized the Capitol building in Washington, the Speaker of the House, Nancy Pelosi, launched into a bizarre and rather ungrammatical rant, proving in the process that conspiracy theories are far from the unique preserve of the American right. Talking of the previous day’s events she remarked that “the message it sent to the world, a complete tool of Putin, this President is. Putin’s goal was to diminish the role of – the view of democracy in the world. That’s what he has been about. And, again, his enabler in this has been Donald Trump for a long time. That’s why I said in that photo when I’m leaving his meeting, ‘With you, Mr. President, all roads lead to Putin.’”

As if taking their cue from Pelosi, commentators have since been working hard to link events in the American capital with Russia and Putin. Lacking firm evidence for this, their claims have become increasingly outlandish.

Take for example an article by Natasha Bertrand published on Tuesday in the online magazine Politico. This focused on a Russian by the name of Andrey Illarionov, who served as an economic adviser to Vladimir Putin in the early 2000s. According to the article, Illarionov, long a senior fellow at the libertarian Cato Institute in the US, has left the organisation after publishing a blog post defending the Washington rioters.

As Ms. Bertrand writes, Illarionov argued that “the storming of the capitol was a ‘trap’ set by police following deliberate ‘provocation’ by Black Lives Matter activists and Democrats. He also amplified unfounded claims about Antifa infiltrating the protests, claimed it is ‘still unknown’ who won the 2020 presidential election, accused the leadership of the Democratic Party of ‘seeking to establish its monopoly dominance in the country,’ and wrote that rioters were ‘definitely not’ violating the US Constitution when they broke into the building.’”

One might wonder why it matters what some long-retired Russian official thinks. But that would be missing the point. He’s Russian!!! He’s linked to Putin!

As Bertrand continues, “Some analysts have raised concerns that Illarionov’s comments are legitimized by virtue of his affiliation with the think tank, and again raise the specter of Russian attempts to sow chaos and doubt in the legitimacy of US elections.

“Ilya Zaslavskiy, a researcher now leading a project on post-Soviet kleptocracy called Illarionov’s posts ‘downright dangerous,’ noting that they are shared widely within Russia and among Russian-American Trump supporters.”

In other words, we are supposed to believe that Illarionov is acting on Putin’s behalf to “sow chaos” in the United States. His blog post is further proof, if any were required, of the Kremlin’s evil designs.

Except for one thing: Illarionov is no friend of Vladimir Putin. In 2005, he quit the Russian government, complaining of what he called its authoritarian turn. Since then, he has stood quite clearly in the ranks of the “non-systemic” opposition, and on taking up his position at the Cato Institute in 2009 was described by the state-run Voice of America as “one of Russian President Vladimir Putin’s most prominent critics.”

Nothing Illarionov says or writes could therefore be said to represent the position of the Russian government. The idea that his blog post indicates that the Russian state is trying to ‘sow chaos’ in the United States is beyond laughable. Anybody with even the slightest knowledge of Russian politics would have known this.

How, then, does such obvious ‘fake news’ about Russia keep appearing in the American media? There are really only two options – extraordinary ignorance about all things Russian; or a willful lack of concern for the truth. It is hard to say which is better.

Beyond that, though, the Politico article does reveal something rather interesting about Russian liberals, a category in which Illarionov would certainly belong. And in the process, it also indicates a lack of understanding of how Russian liberals differ from their American counterparts.

The word ‘liberalism’ has many meanings. In its original form, classical liberalism, it was associated with a limited state, individual rights, and a system of law in which everyone was treated equally. In modern America, its meaning has undergone something of a reversal. To be ‘liberal’ now means to favor big government, identity politics, and group rights, and to support what philosopher Charles Taylor has called “the politics of difference.”

This modern form of liberalism has found little traction among Russian liberals, whose foundational period was the late 1980s and early 1990s when classical liberalism, in its modern neoliberal form, held sway. Illarionov, for instance, played a role in persuading Putin to adopt a low 13 percent flat-rate income tax, an archetypal neoliberal economic policy. For such classical/neo-liberals, economic freedom and individual rights are key. Big government, group rights, and identity politics are something to be fought. In other words, Russian liberals and American liberals are not natural friends.

It’s hardly surprising, therefore, to see Illarionov coming out in favor of Trump and attacking Black Lives Matter. It’s very much in keeping with how Russian liberals think. As an article in Foreign Policy magazine pointed out earlier this year, while the Russian government has expressed some sympathy for the anti-racism movement in the US, Russian liberals haven’t. On the contrary, they have tended to be rather hostile toward it.

Liberal journalist Yulia Latynina, for instance, denounced the riots last summer which followed the killing of George Floyd as “pogroms,” and complained that the rioters were destroying private property. Meanwhile, another liberal journalist, Oleg Kashin, tweeted an image with the caption “Martin Looter King,” and one-time presidential candidate Ksenia Sobchak was fired as brand ambassador for the German carmaker Audi “after posting a racist tirade on Instagram describing Black Americans as stupid and lazy.”

Illarionov, in other words, is not alone. In many ways, Russian liberals have much more in common with the American Republican Party than with the Democratic Party. As the Democrats prepare to take power, instead of lazily shouting ‘Putin, Putin, Putin!’ whenever the word ‘Russia’ pops up, that’s something that they might want to bear in mind.