Home / WORLD / US may seize Afghanistan’s national reserves, but its threat to isolate Taliban is, indeed, ‘unmoored from reality’

US may seize Afghanistan’s national reserves, but its threat to isolate Taliban is, indeed, ‘unmoored from reality’ 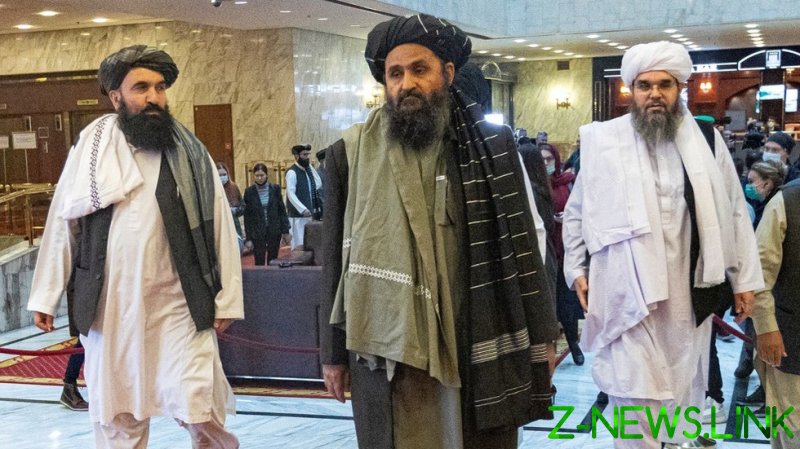 As Taliban forces were on their final push to take the Afghan capital, the West was issuing threats of reprisals, should the militants take power by force. A Taliban government would become “global pariahs,” Zalmay Khalilzad, the US special envoy to the country, warned.

Yet, delivering on such threats now that they’ve failed to keep Kabul out of Taliban hands may be impossible, with some key stakeholders themselves subject to Western attempts to isolate them. In the run-up to its military victory, the Islamist movement intensified its diplomatic outreach and apparently has won plenty of goodwill from non-Western players.

Both China and Russia have declined to evacuate their diplomatic staff from Kabul, even as Western diplomats scrambled to flee, trusting the Taliban’s safety guarantees. They stopped short of recognizing the Taliban as the new legitimate leadership, but said they will work with the militants to ensure a smooth transition of power. Zamir Kabulov, Russia’s opposite number to US’ Khalilzad, even complimented the Islamists, saying they seemed more trustworthy negotiations partners than the fallen US-backed “puppet government.”

During the diplomatic offensive, Taliban officials offered Russia and Beijing respect for their national interests. China was told the Taliban would cut ties with Islamist Uighur separatists from the East Turkestan Islamic Movement (ETIM), denying them a foothold to launch attacks on Xinjiang province.

Russia was promised non-interference in Central Asia, addressing certain security concerns of Moscow’s allies there. The Afghan militants held talks with officials from neighbors Turkmenistan and Uzbekistan, with Russia facilitating these.

Iran last month hosted high-level talks between the militants and the Afghan government. India had reportedly established a backchannel to the Taliban. Turkey made no secret of its ambitions in post-NATO Afghanistan and would need cooperation from the militants to have a say on Afghanistan’s future in the new circumstances.

Pakistan’s attitude to the Taliban takeover seems quite appreciative. Prime Minister Imran Khan was reported as describing it as breaking the “shackles of slavery.” Islamabad was one of a handful of world capitals that recognized the Taliban government of the 1990s.

Meanwhile the pullout of NATO troops, which was initiated by the US in April with no prior consultation with other members, has sent the alliance into disarray. Britain was particularly publicly vocal, stating how the US move and subsequent chaos had put London in a difficult position. A tearful Defence Secretary Ben Wallace said “the West has done what it has done,” when talking about the hectic evacuation of British citizens and Afghan allies from Kabul.

Paris likewise pointed at Washington when allocating the blame. Defense minister Florence Parly distanced her government from what was happening, telling France-Info radio that it has not been in Afghanistan since 2014 and that there was “no parallel to make with the US involvement.”

In Italy, right-wing politician Giorgia Meloni blasted the US Democratic party, saying that the events in Afghanistan played out according to a “cynical Obama-Clinton-Biden doctrine: ‘If you can’t win, create chaos.’” With moods like those across the Atlantic, Washington may find it difficult to rally support for a coordinated isolation campaign, even if countries like the UK share the goal itself.

The US is far from lacking leverage. After the fall of Kabul, Washington said the Taliban will not get access to Afghanistan’s national reserves kept in US-controlled bank accounts, which were estimated at $9.4 billion in April.

As Iran or Venezuela can attest, the US has no qualms about taking liberties with foreign assets that belong to nations that have a falling-out with America. The money could go to pay hefty compensation to victims of Taliban or could be handed over to some Afghan government-in-exile led by a Mohammed al-Guaido, for example.

But such forms of leverage may not be as good a tool to influence the policies of people, who fought against a NATO military presence in their country for two decades. As Kurt Volker, the hawkish former US ambassador to NATO, put it, threats of Taliban isolation “are unmoored from reality.” The movement’s fundamentalist ideology and reputational gains from driving Western soldiers out “is worth far more than aid budgets,” while the US may be the one to “actually feel more isolated” after the chaotic scenes in Kabul.