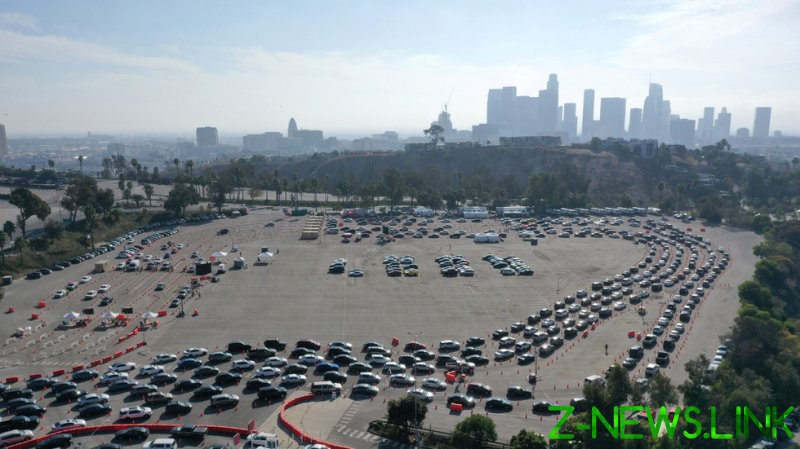 The entrance to the stadium, which has been serving as the mass vaccination site since mid-January, was sealed at around 2 p.m local time after a sparse crowd of protesters staged a rally near the gate.

Footage on social media showed several dozen protesters turning up with signs that read “Covid is a Scam,”“End the Lockdown,” “99 percent survival rate” and “No Vaccine” among others.

The Los Angeles Times reported that the decision to block the motorists from driving inside the gate came from the Los Angeles Fire Department, and was deemed a “precaution.”

The site was off limits to those willing to get a Covid-19 jab for about an hour. It was not immediately clear why the stadium was temporarily closed, with author Mikel Jollett tweeting that “only about 30 protestors total” took part in the demonstration.

Footage posted by local reporter Emily Holshouser shows police officers securing the gate, and preventing anyone from getting inside. In the video, a man confronts an officer at the gate as to why police cannot let anybody in. The officer does not elaborate, saying only that he is acting on orders. “Right now it’s closed. You are not going to get through anybody right now. Just wait in your car, that’s the best you can do right now,” he says.

Shortly before the gates were unlbocked, a caravan of several police vehicles – apparently a back-up – could be seen arriving at the scene.

While some commentators on social media placed blame on police for hindering the immunization campaign, LAPD denied it has anything to do with the site’s closure.

“The LAPD did NOT close the gates, and per LA City Fire, all scheduled vaccines will be delivered,” police said in a statement, adding that the protesters “remained peaceful.”

LAPD police chief Michel Moore noted that the officers were working with “public safety partners” to ensure everyone who is scheduled to get the jab won’t leave without being administered one.

In the series of tweets that followed, Moor repeatedly argued that the protest did not trigger the site’s closure.

“The protest did NOT shut down the vaccination site. ALL appointments are being met,” he stated.

Before being repurposed into the mass vaccination site, the stadium served as a mobile testing site. Earlier this month Los Angeles Mayor Eric Garcetti estimated that up to 12,000 people can be vaccinated at the site each day.