Home / WORLD / US is ill at ease with itself, but bashing Independence Day as ‘racist’ will only disunite the divided country further

US is ill at ease with itself, but bashing Independence Day as ‘racist’ will only disunite the divided country further 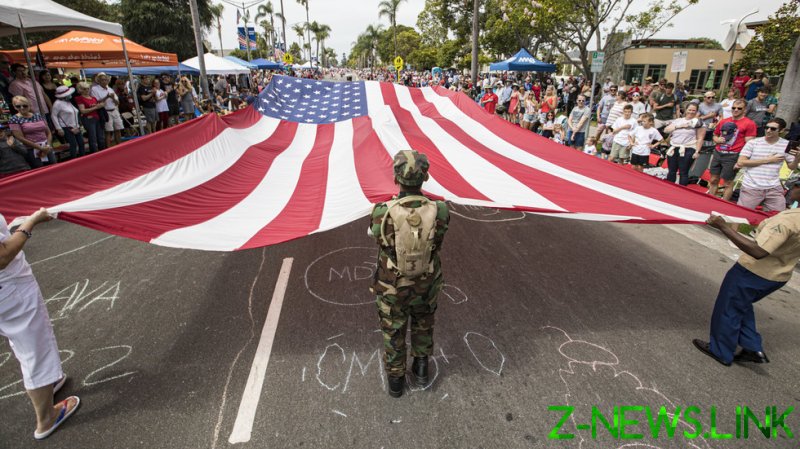 The Fourth of July is the celebration of the founding of the nation back in 1776, when the Declaration of Independence from Britain was approved. The day is marked by fireworks, parades, picnics, and parties across the country, and it is meant to bring people together. Independence Day, however, is now under attack like never before.

Critics claim that Independence Day is racist and an example of white privilege. They argue, therefore, that it should not be celebrated. These criticisms can no longer simply be dismissed as the rantings of extreme liberals and the far-left; they are now becoming mainstream.

For example, last year Colin Kaepernick, the former American footballer who first ‘took the knee’, encouraged Americans not to celebrate Independence Day. “Black ppl have been dehumanized, brutalized, criminalized + terrorized by America for centuries, & are expected to join your commemoration of ‘independence’, while you enslaved our ancestors,” he tweeted.

The critics of Independence Day now have a rival holiday to celebrate. Last month, President Biden signed a presidential order establishing June 19 as Juneteenth National Independence Day, which commemorates the date in 1865 when slavery was abolished in the US.

In my opinion, making this day a national holiday was entirely appropriate. However, it has encouraged activists to set ‘Juneteenth’ as a rival to Independence Day. Take, for example, an article written by podcaster Toure Neblett, who stated: “F**k the Fourth of July. In a world where we officially recognize Juneteenth, that great new holiday sits on the calendar casting a long shadow over Independence Day, making it look like a hypocrite and a damn fool.”

Then we have the campaign led by the New York Times, which calls for the year 1619 to be recognised as the United States’ year zero. This would make Independence Day redundant. The premise of the 1619 Project is that this was the year slaves were first landed on American soil. According to the New York Times, the campaign seeks “to reframe the country’s history by placing the consequences of slavery and the contributions of Black Americans at the very center of the United States’ national narrative.”

Although the validity of this campaign has been challenged by historians, the fact that it exists emphasises how a portion of Americans are uncomfortable with their own history.

When Donald Trump was in the White House, he attempted to challenge this rewriting of history by launching the 1776 Commission. This commission, which was composed of academics, former politicians, and businessmen, sought to promote patriotism through education. Opponents, however, denounced it as “nationalist propaganda.” Moreover, one of Joe Biden’s first acts as president was to issue an Executive Order abolishing the 1776 Commission.

Economist Glenn C. Loury, himself an African American, sums up the present situation perfectly when he asks, “Are we going to look through the dark lens of the U.S. as a racist, genocidal, white supremacist, illegitimate force? Or are we going to see it for what it has become over the course of the last three centuries: the greatest force for human liberty on the planet?” Unfortunately for Loury, there seem to be a growing number of Americans who believe the former, and this alone puts Independence Day in jeopardy.

The United States is clearly a country ill at ease with itself. This is exacerbated by the teaching of critical race theory in some schools and universities. Critical race theory encourages students to view the world through the prism of race, and the consequence is division. This is extremely unhealthy for any society, and it is understandable that a number of states are seeking to have it banned.

Nevertheless, there are a minority in the US who are increasingly uncomfortable with their country’s past and present. They are loud, powerful, and mainstream. They are in the media, they are academics, and they drive the political agenda.

The United States is now reaching a point where Independence Day celebrations could become a dividing line between Trump supporters and ethnic minorities and white liberals. It is clearly a divided country, and it needs to reunite. However, bashing Independence Day, rewriting history, and teaching people to view everything through the prism of race is not the answer.