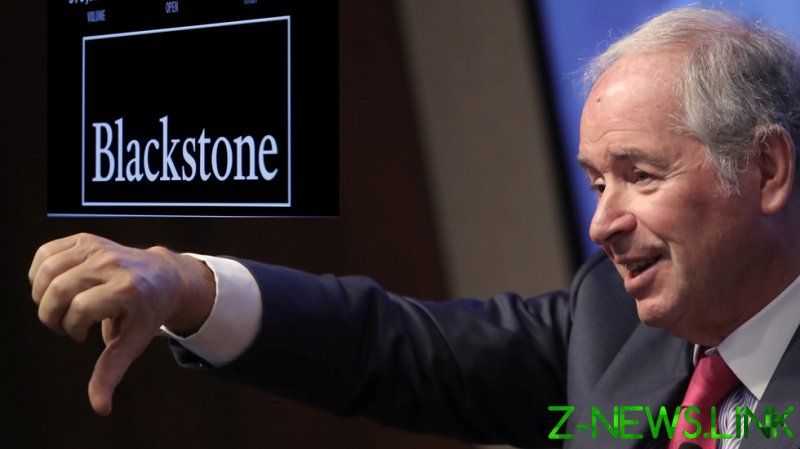 Owning a home is no longer feasible for Americans coming of age in the 21st century, according to Bloomberg columnist Karl Smith, who smugly suggested in an op-ed that they stop worrying about whether they can afford a house, ignore the asset-stripping investment vultures, and just embrace the depressing reality of lifelong debt peonage under the rule of those same private equity giants.

Lest there be any misunderstanding, the feudalist character of this glorious new “sharing economy” is reflected in one increasingly popular “solution” for the generation currently facing the steep uphill climb to pay off their student loans. Under this scheme, known as Student Loan Asset Backed Securities (SLABs), students are invited to essentially indenture themselves to some corporation, paying off their debts by selling off a percentage of every paycheck they subsequently receive until the balance is zero. Any questions?

Feudalism for thee, but not for me

With multi-trillion-dollar asset managers such as BlackRock, Blackstone Group, State Street, and Vanguard flaunting their bottomless pockets, ordinary mom-and-pop landlords looking to buy an extra property or two to open up a guaranteed income stream don’t have a chance in such a rigged market – and neither do their tenants.

Just as they did after the 2008 mortgage implosion, giant corporations are sprouting up everywhere, snatching for-sale homes off the market sight unseen, paying a hefty premium to do so, then turning around and charging fee-laden premiums to the new tenant for what, in pre-“new-normal” times, would have been considered the landlord’s responsibility.

But even with the dark truths of the so-called “sharing” or “stakeholder” economies on display for all to see, Smith sees absolutely nothing wrong with this model, indeed suggesting Americans should be grateful for the opportunity to submit to this shiny neo-feudalism. Smirking at the idea of a required “revision of the American dream of homeownership” – that is, dispensing with the idea of dreaming of a better life altogether – Smith quipped that “this country was always more about new frontiers than comfortable settlements, anyway.”

Conor Sen, another Bloomberg columnist floating by on his own smugness, came to similar conclusions, dismissing the fact that filling up an area with cheap, low-quality housing wrecks the market value of nearby homes by explaining that the landlord would somehow “take care of that.” But home ownership has long been considered one of the only ways – if not the only way – for young people to build up the equity required to start accumulating real wealth in the US economy. Houses are unlikely to seriously or rapidly depreciate in value, unless bought just before a speculative bubble bursts, but if the apartment you’re renting is worth more over time, you don’t see a penny of the increase – indeed, your life might actually become more difficult as speculators start circling your rented home.

Renting from disinterested private equity giants such as BlackRock, the world’s largest asset manager, and Vanguard, its privately owned counterpart, is putting oneself at the mercy of a faceless slumlord with vanishingly little financial interest in fixing what’s broken in any given apartment they own. Tenants have complained to the media about spurious rent hikes, evictions without notice, and delayed or never-completed repairs – and the problem is by no means limited to the US, or even North America, according to a United Nations working group.

But according to Smith, this all pales in light of the magic of renting, driven by the company’s own very special “risk-monitoring software,” dubbed Aladdin – a supercomputer that will grant you three wishes (as long as none of them are “make me a homeowner”). No cumbersome house to sell when you want to pull up the stakes and move to another state! No messy refugee camps! The very features that made houses an affordable and stable investment are coming to an end, he insists, embracing the change like someone who’ll never have to deal with its consequences.

The practice of buying homes at jacked-up prices only to turn around and rent them to people who can barely afford the cost of the home itself, let alone the heaps of spurious fees tacked on, is not new, but it’s been growing rapidly over the past decade, turning asset managers into some of the country’s biggest landlords.

Blackstone subsidiary Invitation Homes was buying entire neighborhoods at a clip just a few years after the 2008 mortgage crisis sent homeownership into a death spiral. Helping that death spiral along, it treated its new tenants with all the warmth and benevolence of a hungry saber-toothed tiger.

The company supposedly quit the real estate market in 2019, selling off Invitation Homes to cheers from those who’d been living under its thumb – but the tenants who’d rejoiced at getting its boots off their neck did so prematurely. The firm returned to the single-family rental market with a massive investment in a group called Tricon just a few months later, and other private equity companies then joined in the feeding frenzy, driving up property values in cities all over the country, to the frustration of those merely trying to find a nice place to settle down.

Having nabbed the coveted post of running the US Federal Reserve’s special investment vehicles under the CARES Act last year – not once, but thrice – BlackRock is rapidly outpacing its progenitor, Blackstone, in terms of sheer rapacious asset-stripping. Massive asset managers such as Vanguard and State Street have so much money one might think they’re literally running out of things to spend it on – but the firms’ return to manipulating the market suggests more sinister machinations are at work.

Far from running out of things to purchase, the private equity coteries are reducing entire industries into vertically integrated, dehumanizing life cycles. Groups like Blackstone and BlackRock are following in the filthy footsteps of the Sackler family, whose Purdue Pharma got hundreds of thousands of Americans addicted to opioids only to turn around and patent a new delivery system for addiction treatment. Likewise, BlackRock and Blackstone have meticulously made money on both ends of the ongoing real estate steal – er, deal, cashing in when a family leaves in disgust at their landlord’s nickel-and-diming and minting of fees out of thin air.

That said, when you have more money than God, there’s always more to buy, and Blackstone last year set about acquiring a chain of self-storage facilities via its real estate unit, essentially betting that the long-delayed tidal wave of Covid-19 evictions would leave Americans with nowhere to go and preferring their stuff stashed in a shipping container rather than strewn across their lawn. The private equity firm had the chutzpah to praise the “resilient” nature of self-storage – apparently trying to paint the disenfranchisement of the American population as a net positive for the environment. Presumably, people will be living in these shipping containers alongside their ‘stuff’ in the near future – if they aren’t already.

Between the specter of 2008 repeating itself and the flood of near-worthless paper exiting the money printer over the past year, it’s hard to imagine the US pulling itself up out of this particular financial hole any time soon. Especially with events unfolding religiously in line with the path financial institutions took in 2008, the phenomenon of “regulatory capture” ensures history will repeat itself over and over again.

So, what does that mean for ordinary Americans? An attack of déjà vu (and a visit from the sheriff’s department) are almost guaranteed – and, once again, no one will talk about it until it’s too late. News outlets such as the Wall Street Journal, The Atlantic, and even Vox.com have struggled to deploy detachments of euphemisms in such a way that the population feels a little less doomed, but that’s a tall order when the Federal Reserve has poured more cash into the market in the past year than in the first century of its existence.

The private equity vultures’ controlling stakes in the most influential media organizations explain why there are so many trite headlines downplaying the activities of beasts like BlackRock instead of calling it what it really is: a shadow Federal Reserve, capable of foisting debts incurred through risky trading on the average citizen’s savings, but never ever allowing the ordinary citizen to share in the spoils of victory.

That leaves the average American languishing in pod apartments in overbuilt cities, where – as the now-ubiquitous World Economic Forum coming-attractions roll for the New World Order (their words, not mine) never tired of saying, “You’ll own nothing, and you’ll be happy.”

Where is this going?

What do you get the private equity giant who literally has everything? These companies’ takeover of the real estate market is an ominous harbinger of the World Economic Forum’s “Great Reset,” in which the individual is gradually stripped of the few rights and assets they still have and lulled into passivity. We are staring down at the corpse of the American Dream, tied like a trophy hunter’s kill to the roof of our new electric vehicles (leased, never owned!), unaware that what we are looking at is our own future. Efforts to present this atrocity as either “new” or “normal” have been found wanting over the past year, and it seems all but impossible that that element of the New Normal will be achieved – but humans are adaptable creatures, and we can con ourselves into pretty much anything.