US heads into Thursday without clear winner in 2020 presidential race: Key battleground states still in limbo 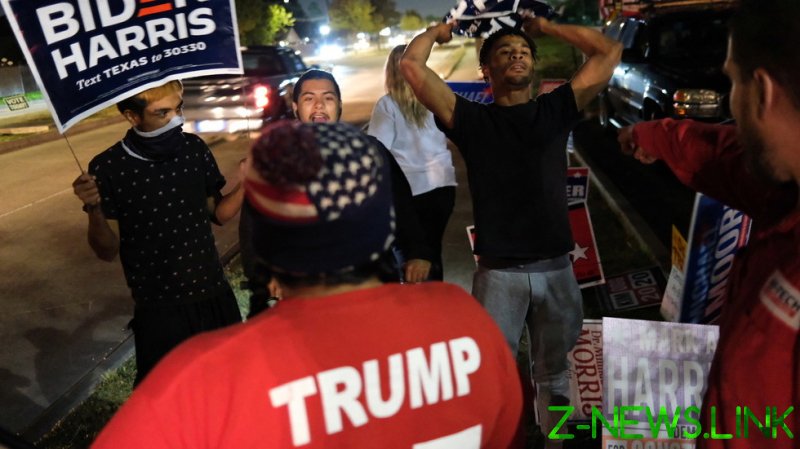 Both Biden and Trump are racing to claw together enough electoral votes to declare victory, but pauses in ballot counting, razor-thin margins, and legal complaints make it unlikely that there will be a clear winner declared two days after Americans headed to the polls.

Biden is projected to win both Michigan and Wisconsin. He said earlier on Wednesday that it’s “clear” he will secure the 270 electoral votes needed to win the presidency, though he stopped short of declaring victory.

But the Democrat may not be able to rest on his laurels just yet. The Trump campaign announced that it would seek a recount in Wisconsin and is also taking legal action in other key states, and has filed suit to halt the vote count in Michigan until it is granted “meaningful access” to several ballot-counting stations, while issuing a legal challenge against the extension of ballot deadlines in Pennsylvania. The Trump campaign is also petitioning the courts to segregate late absentee ballots in Georgia.

The Trump campaign has taken issue with mail-in and absentee ballots, alleging that some votes were received after the deadline. A Republican poll worker claims to have observed dozens of late absentee ballots being mixed in with mail-in votes submitted on time, prompting lawyers for the state’s Republican Party to request a court order that would separate ballots that were received late, so that they could be examined later.

In Michigan, the Trump campaign claims that absentee ballots have been tabulated without bipartisan observers, and filed suit to halt counting until it could have its own representatives present at several counting sites.

As for Wisconsin, Biden’s tiny margin of victory – less than one point – has allowed Trump to request a recount. Trump was leading in both Michigan and Wisconsin on Tuesday night, prompting him to declare an early victory. He also alleged that there were attempts to steal the election.

If Biden holds Michigan and Wisconsin, it would put him just six electoral votes away from victory, meaning he would only need Nevada to be declared the victor. Biden is up by less than one point in the state, but Nevada election officials have halted counting and said it won’t resume until Thursday morning. The Democrat has also been projected as the winner in neighboring Arizona, but ballot-counting continues in the state and the Trump campaign insists that it could pull ahead.

Trump currently leads in North Carolina, Georgia, and Pennsylvania, but if he’s unable to wrestle back Wisconsin or Michigan, he would need to secure a victory in Arizona or Nevada.