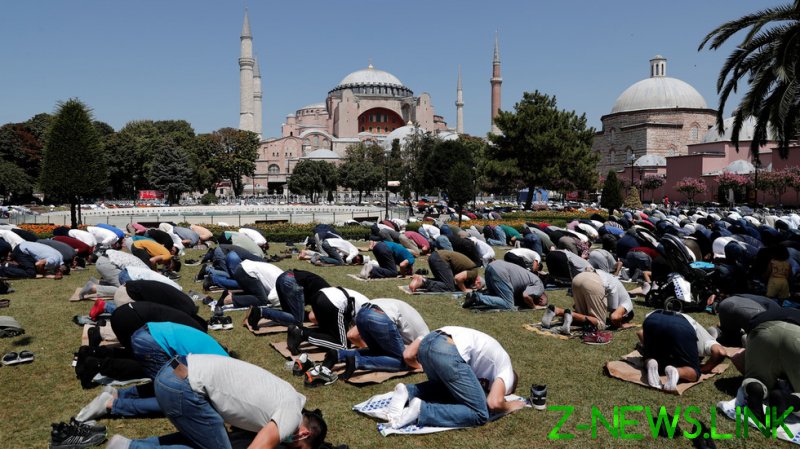 The Greek Orthodox Archdiocese of America told AP on Tuesday that it would contact UN rapporteurs and attempt to hold Ankara accountable “for its deliberate policies to erase the cultural heritage of Orthodox Christians.”

The Turkish president issued a decree in July converting the Hagia Sophia back into a mosque. Once a Byzantine cathedral, it was repurposed as a mosque under Ottoman rule, and then a museum in 1934 by Mustafa Kemal Ataturk’s secular government.

Erdogan himself attended inaugural prayers at the newly-minted mosque, and last month announced the conversion of another Orthodox church – the Church of the Holy Saviour in Chora – into a Muslim house of prayer.

“Turkey is in violation of its obligations under international law to preserve cultural heritage and to respect the political, cultural and religious freedoms of Orthodox Christians in Turkey and abroad,” Archdiocese of America counsel Christina Hioureas told AP.

Erdogan has promised to keep the Hagia Sophia open as a museum outside of worship hours, but the move still generated condemnation from religious and secular authorities worldwide. The UN said it was “disappointed” in the Turkish leader, while EU and US leaders urged him not to go ahead with the move.

Russian Orthodox bishop Metropolitan Hilarion of Volokolamsk described the move as “a slap in the face” of Christians worldwide.