Home / WORLD / US government takes some Covid-19 relief benefits BACK from workers after OWN mistake, while corporations hoard relief money

US government takes some Covid-19 relief benefits BACK from workers after OWN mistake, while corporations hoard relief money 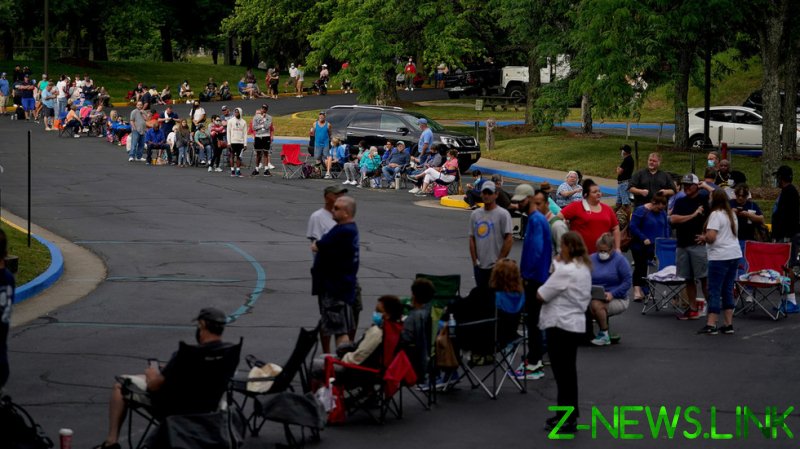 Workers who erroneously received a financial windfall under the massive expansion of state unemployment benefits that formed a key part of the federal government’s Covid-19 relief package are being told they owe thousands of dollars in surprise crippling debt as the states struggle to claw back their excess payments, the Wall Street Journal revealed on Monday.

Through no fault of their own, thousands of benefit recipients in states including Pennsylvania and Colorado received abnormally large checks under the Pandemic Unemployment Assistance (PUA) program. While many assumed the large sums were simply accrued payments they had been due from previous months, others were troubled by the unexpected bounty – and all are being punished equally for the bureaucratic oversight.

One woman, having done a double take when faced with a prodigious relief check, even phoned the Department of Labor and Employment to make sure there hadn’t been a mistake, she told the WSJ. Self-employed health coach Meggan Hurley, who claimed she repeatedly spoke with unemployment insurance officers during the aid application process to verify she was filling out the forms correctly, was reassured all was well – only to receive a bill in September for $13,969, the amount she was allegedly overpaid.

An official at Colorado’s Department of Labor blamed the overpayments on applicants misrepresenting their income. Other states were willing – albeit grudgingly – to admit some culpability, or at least share the blame with applicants. While Ohio’s Department of Job and Family Services acknowledged as many as 20 percent of PUA recipients – some 108,000 people – had been overpaid, it argued agency error alone was to blame in just a small number of cases, with mistakes by both claimant and bureaucracy being more common. But a software error in Pennsylvania’s program caused the overpayment of thousands of benefit recipients, leading the unemployment office to slash some checks by half without warning once it realized the mistake – even if the applicant had done nothing wrong.

With the federal expansion of pandemic unemployment benefits having dried up months ago, any excess cash most out-of-work Americans received has likely been spent. State, local, and federal eviction moratoriums are running out, compounding the risk for those without income. And while an executive order from the Trump administration and the Centers for Disease Control at least theoretically prevents landlords from evicting renters before the end of the year due to the ongoing pandemic, it is being challenged in court.

The Labor Department punishes states that overpay unemployment benefits by giving them less cash to spread around in the next round of benefits, meaning the PUA snafus could have lingering repercussions for those still desperately in need of a financial lifeline. Destitute and still-jobless Americans could find themselves in the middle of a tug-of-war between landlords struggling to pay their mortgages and states desperate to avoid federal penalties. Adding insult to injury, ‘debt’ from PUA overpayment cannot be forgiven by the state, because it is classed as disaster relief.

While some House Democrats have introduced legislation to allow states to forgive that debt in cases of “severe hardship,” the provision is part of the mammoth Heroes Act, the infamous $2.2 trillion stimulus package that has played host to a partisan tug-of-war for months while the US economy stagnates. The package, which has been significantly whittled down from its original $3.4 trillion, would reinstate the $600 monthly unemployment benefits and send out another round of $1,200 checks to US households – a band aid on a gaping bullet wound in a country where the labor force participation rate has sunk to 61.4 percent.

The treatment of individual benefit recipients stands in stark contrast to Washington’s kid-gloves handling of megacorporations during the pandemic. Large American companies were handed hundreds of billions in no-strings-attached “emergency aid” as part of the CARES Act Covid-19 relief package, with no requirement that it be spent on payroll or operating expenses rather than, say, fat bonuses for senior executives. The Federal Reserve and Treasury Department ponied up $500 billion to buy bonds issued by those companies, with no restrictions on how the funds could be spent.

In contrast, the Paycheck Protection Program – the $659 billion small-business bailout passed in March’s CARES Act – required businesses that received federal loans to certify they would put the money toward payroll, rent, and other operating expenses rather than lining their own pockets. And even participants in the $600 billion midsize business relief program were limited in how much they could pay executives and stockholders, and had to make “reasonable efforts” to hold onto their employees for at least a year.

Large corporations have long received special treatment, in a system in which both parties compete to be more “pro-business” than the other. Treasury Secretary Steven Mnuchin outraged many in June when he announced the Trump administration would not be revealing which companies received PPP (small business) loans, reversing course on an earlier promise to audit the loans of anyone who received more than $2 million from the program.

The discovery that several large restaurant chains – including Potbelly, Shake Shack, and Ruth’s Chris Steakhouse – had availed themselves of the cash pool meant for small businesses despite employing thousands of employees triggered an outpouring of rage, shaming some companies (including Shake Shack) into returning their bailout money.

While bigger companies seemed to have a choice on whether or not to return the money willingly, the situation for workers and small business owners has proved very different, as Hurley, the health coach sandbagged with five-figure debt, discovered. She has started a petition demanding Congress waive the surprise charges.

“It was an error in your system. I submitted my information in good faith that you knew how to do math. You can’t place the burden of your error on me,” she told the Wall Street Journal.