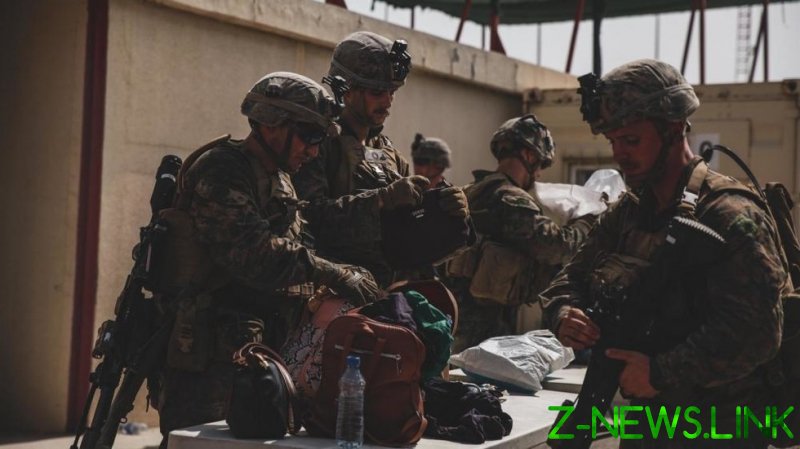 Asked on Thursday whether the White House fears that US citizens stranded in Afghanistan could become “hostages,” Jake Sullivan demurred, telling NBC’s Lester Holt that the evacuation process is dangerous but is “working” for now, before raising the specter of terrorism.

“I want to level with the American people, this is a risky operation. We have now established contact with the Taliban to allow for the safe passage of people to the airport. And that is working at the moment,” he said, but added “we can’t count on anything.”

ISIS-K – the name given to the Islamic State faction in the so-called “Khorasan province,” a historical region covering parts of Afghanistan and Iran – emerged around 2015, largely made up of fighters from the Pakistan-based Tehrik-i-Taliban. Since forming in Afghanistan’s Nangarhar region, the group has repeatedly clashed with the Afghan Taliban, at some points even seeing US war planes provide air support, with American troops jokingly dubbing themselves the “Taliban Air Force.”

In contrast to other ISIS affiliates seeking to launch attacks abroad, ISIS-K has largely remained a local concern within Afghanistan and Pakistan.

Though he stressed the administration’s concerns about terrorism from ISIS-K or similar groups, Sullivan offered no evidence to suggest an attack is imminent, leaving details vague. Defense Secretary Lloyd Austin also noted on Wednesday that American forces would not leave the Kabul airfield, suggesting there is little they could do to track down would-be terrorists.

The NBC anchor also quizzed Sullivan on how many American citizens remain stuck in Afghanistan amid the hasty pull-out operation – launched after the Taliban seized Kabul last weekend – but he had no clear answers.

“We don’t have a precise number,” Sullivan said, explaining that the government has trouble keeping track of the comings and goings of citizens, and that “we can’t know for certain how many Americans are in-country.”

Earlier on Thursday, Pentagon spokesman John Kirby was asked the same question, but simply said “I don’t know,” directing journalists to the State Department for an estimate.

However, Ned Price of the State Department also had few details to give during his Thursday briefing. While he said a total of 7,000 people had been evacuated so far, he was “not in a position to break that down much further” and did not say how many Americans remained in the country. Price added that another 6,000 people of unspecified nationality were cleared and ready to leave the Kabul airport, but referred reporters back to the Pentagon for more details on exactly what the evacuation mission entails.

As of Wednesday, the Associated Press estimated that some 15,000 US citizens were still in Afghanistan, though other reports have put the number lower. The Defense Department is aiming to evacuate between 5,000 and 9,000 people per day, but has only averaged about 1,100 daily so far due to difficulties with getting people to the airport, among other complications. Evacuees include US diplomatic staff and other workers, as well as Afghans who worked alongside the coalition and other locals considered at risk of Taliban reprisals.

While the US Embassy in Afghanistan recently warned citizens that it could not “ensure safe passage” to the Kabul airport and that flights would operate on a “first come, first serve basis,” Sullivan nonetheless told NBC that “we will get any American who wants to get to the airport… we will make that happen.”