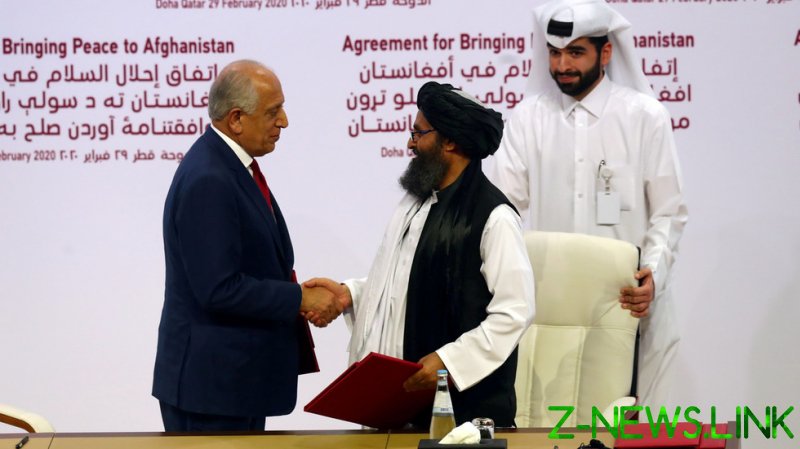 Khalilzad’s resignation was announced by Secretary of State Antony Blinken on Monday, noting that he will soon be replaced by his deputy Thomas West, a holdover from the Barack Obama administration.

“I thank Ambassador Khalilzad for his service and welcome Special Representative West to the role,” Blinken said in a statement, adding that the new envoy, who previously served on Obama’s national security team, will now “lead diplomatic efforts” with Afghanistan’ new Taliban-led government. The secretary did not offer a reason for Khalilzad’s decision to leave his post.

A Donald Trump appointee with long ties to hawkish neoconservative groups going back to the Bush Jr. era and beyond, the now-former envoy served as point-man on US negotiations with the Taliban ahead of Washington’s exit from Afghanistan, helping to bring an end to the longest war in American history. Growing up in Kabul before spending time in the United States as a foreign exchange student and later earning a doctorate from the University of Chicago, Khalilzad played a major role in inking the February 2020 Doha deal which committed US forces to a full-on withdrawal.

In a resignation letter dated October 18 and obtained by several media outlets, Khalilzad noted that the US is now “entering a new phase” in its Afghanistan policy, saying he was brought on to the Trump administration “after the decision had been made to substantially reduce or end the military and economic burden of the Afghan engagement on the US.” This, he said, was meant to free up resources “for vital priorities, including domestic needs and the challenge of dealing with issues related to China.”

He lamented, however, that despite their efforts, a long hoped-for political settlement between the Taliban and the US-backed government in Kabul “did not go forward as envisaged,” explaining that “the reasons for this are too complex and I will share my thoughts in the coming days and weeks, after leaving government service.”

Aside from declaring a ‘new phase’ in US-Afghan relations, Khalilzad did not give any reason for his decision to resign, though said he still plans to “contribute to the discussion and debate” about the US’ objectives going forward.

Khalilzad’s resignation made the rounds soon after reports that the State Department’s inspector general would launch a “series of investigations” into the Joe Biden administration’s withdrawal from Afghanistan, according to documents obtained by Politico and NBC News. The probes will reportedly focus on the administration’s Special Immigrant Visa (SIV) program, the processing of Afghans seeking admission into the US as refugees, the resettlement of said refugees as well as the hasty evacuation from the US Embassy in Kabul, including the “evacuation of US citizens and Afghan nationals.”

“Given the elevated interest in this work by Congress and the unique circumstances requiring coordination across the Inspector General community, I wanted to notify our committees of jurisdiction of this important work,” said State Department IG Diana Shaw in a letter to several committee heads in the House and Senate, notifying them that her office intends to open “several oversight projects” in relation to the Afghan pull-out.

Shaw spokesman Ryan Holden, however, denied that the oversight projects amounted to a full-on “investigation” in comments to Politico, instead deeming them “reviews,” though he did not explain the difference between the two.

“State [Department Office of the Inspector General] notified its committees of jurisdiction today of planned projects in the areas you mention,” Holden said. “This work will be conducted in coordination with other members of the IG community. However, it is inaccurate to say that these projects are investigations. We indicated to Congress that these projects will be reviews.”

The Pentagon’s own IG office also has at least three reviews underway in relation to the withdrawal, which will reportedly focus on the badly executed August 29 drone strike in Kabul that killed 10 Afghan civilians – including seven children – the military’s screening process for new Afghan arrivals and Pentagon support for refugee relocation efforts, according to Politico.

Independently, several congressional panels have launched their own reviews of the withdrawal, while John Sopko, the Special Inspector General for Afghan Reconstruction (SIGAR) – the primary watchdog for the war and among its most vocal critics in office – may also launch a separate probe.

Though former President Donald Trump initially negotiated the withdrawal deal over the winter of 2020, with Khalilzad leading those talks, his successor Biden was left with the job of executing the policy. Biden pushed back the original withdrawal deadline by several months, from May to September, though the extra time appeared to do little to smooth out evacuations, which took place over several weeks of chaos, seeing an Islamic State suicide bomber attack outside the gates of the Kabul airport in late August, killing some 170 Afghan civilians and 13 American soldiers. Several Americans seeking to return home, meanwhile, remain stranded in the country, as flights in and out of the Kabul airport have stopped and resumed intermittently amid ongoing post-withdrawal confusion.