US Embassy warns Americans in Kabul to take shelter, says airport reportedly UNDER FIRE amid hasty evacuation of western missions 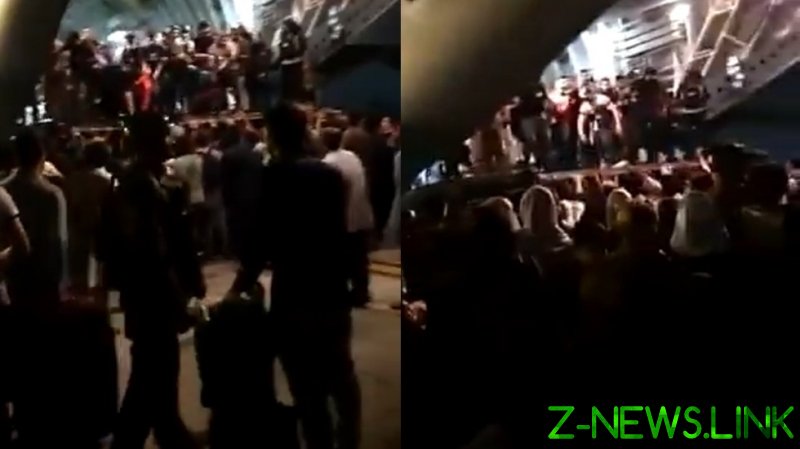 “The security situation in Kabul is changing quickly, including at the airport,” read a security alert from the embassy on Sunday. “There are reports of the airport taking fire; therefore we are instructing US citizens to shelter in place.”

The embassy had for days been urging Americans in Afghanistan to leave the country, offering them assistance in purchasing plane tickets out. As the Taliban encircled the Afghan capital on Sunday, helicopters ferried embassy staff to the airport, where the US’ diplomatic mission would be rehoused.

The evacuation took place under the protection of thousands of American troops, ordered in by President Joe Biden as the Taliban advanced faster than the US could get its staff out.

Several other nations have also moved their diplomatic corps to the airport, including France, which relocated on Sunday evening.

For any Americans who failed to make it to the airport already, the future is uncertain. An alternately-worded alert seen by reporters states that “The US Embassy in Afghanistan has suspended consular operations effective immediately.” Americans are warned: “Do not come to the Embassy or airport at this time.”

“The [US] ambassador has now left the embassy compound and is at the airport, along with the American flag,” CBS News’ David Martin reported around the time of the alert. However, Martin noted that some Americans remain left behind. With the airport their only lifeline to the outside world, and with the Embassy telling them not to travel to the airport, their route out remains unclear.

US troops are reportedly on the ground keeping the airport open, and video footage taken nearby shows crowds of Afghans, some allegedly freed prisoners, streaming toward the airport, suggesting that many will try to enter the facility to leave the country.

NATO Secretary General Jens Stoltenberg stated on Sunday evening that he had been in touch with alliance leaders, and that NATO was “helping keep Kabul airport open to facilitate and coordinate evacuations.”

However, a NATO official later told Reuters that all commercial flights from the airport had been suspended, and that only military flights would be permitted.