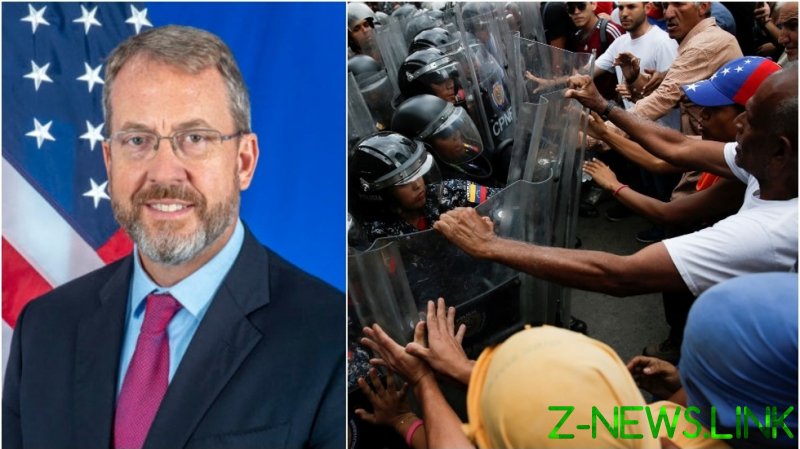 Story’s nomination was confirmed by a US Senate vote. He had previously led an American “virtual embassy” while serving as Chargé d’affairs for the Venezuela Affairs Unit in Bogota, the capital of Venezuela’s neighbor, Colombia.

Washington and Caracas have not exchanged ambassadors since 2010 when then-Venezuelan leader Hugo Chavez refused to accept Barack Obama’s nominee, Larry Palmer, as US envoy. Chavez said Palmer broke “all rules of diplomacy” after he had accused Caracas of backing the left-wing FARC militants in Colombia. Washington retaliated by revoking the visa of Venezuelan envoy, Bernardo Alvarez Herrera.

Diplomatic ties deteriorated further in 2018 when President Nicolas Maduro expelled Todd Robinson, the head of the US mission in Caracas, accusing the diplomat of planning “military, economic and political conspiracy” against him.

Washington has been openly challenging Maduro’s presidency. It backed politician Juan Guaido who has elected by the opposition-controlled parliament as interim president that year and imposed sweeping sanctions on Venezuela.

In March, the US Department of Justice charged Maduro and several other high-ranking Venezuelan officials of corruption, drug trafficking and “narco-terrorism.”

Maduro, meanwhile, has been accusing the US of meddling in the country’s domestic affairs and plotting to topple him though a coup. He also denounced the sanctions, saying they hurt ordinary people.

Story will likely continue to work from Bogota since he openly supports Donald Trump administration’s hardline stance on Venezuela. During his confirmation proceedings in August, the diplomat branded Maduro as “illegitimate” and called for “constitutional transition” of power in the country. “If confirmed, I will work tirelessly with my team to ensure this transition is successful,” he told the Senate Foreign Relations Committee.

It is not clear whether the appointment of Story will change the role of Elliott Abrams, the US Special Representative for Venezuela. His role was officially expanded earlier this year to include Iran as well.

Known for his hawkish foreign policy views, Abrams has been linked with Washington’s support of anti-government forces in Central America in the 1980s. In 1991, he pled guilty to withholding information from Congress about a covert program to fund rebels in Nicaragua.