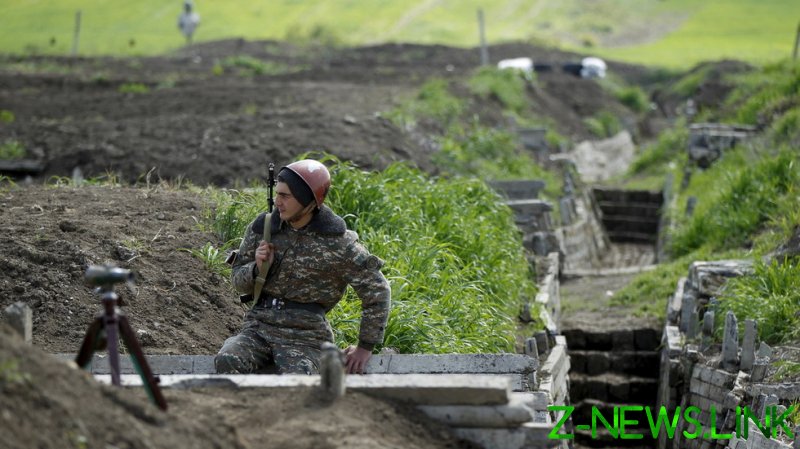 “The United States condemns in the strongest terms this escalation of violence,” the State Department said in a press release on Sunday. Deputy Secretary Stephen Biegun called on both sides to “cease hostilities immediately, to use the existing direct communication links between them to avoid further escalation, and to avoid unhelpful rhetoric and actions.”

Hostilities between Azerbaijan and the Armenia-backed Nagorno-Karabakh region erupted after Azeri forces launched an offensive on Sunday morning. Baku said it was responding to shelling of its forces, but Yerevan rejected the justification, accusing its opponent of breaking a shaky ceasefire.

The US is not the only world power calling for restraint. Earlier on Sunday, Russian President Vladimir Putin called for an end to all military action in Nagorno-Karabakh, after a phone call with Armenian Prime Minister Nikol Pashinyan. During the call, Pashinyan asked foreign powers to stay out of the conflict, after earlier condemning Turkey’s “aggressive behavior” in the region.

Turkish President Recep Tayyip Erdogan has pledged to use his country’s “entire means” to defend his Azeri “brothers,” and called Armenia “the biggest threat to peace and tranquility in the region.”

The US and Russia are both co-chairs of the OSCE Minsk Group, convened in 1992 to find a resolution to the Nagorno-Karabakh conflict. The conflict itself began when the region broke away from Azerbaijan in the late 1980s, with support from Yerevan. Turkey is a member of the group too, but has also been a staunch ally of Azerbaijan since before the group came together, and placed an economic embargo on Armenia in 1993.

Both Armenia and Azerbaijan claimed their own military victories throughout Sunday, publishing videos of attacks online. Around two dozen people have been reported killed, with both sides claiming civilian casualties.