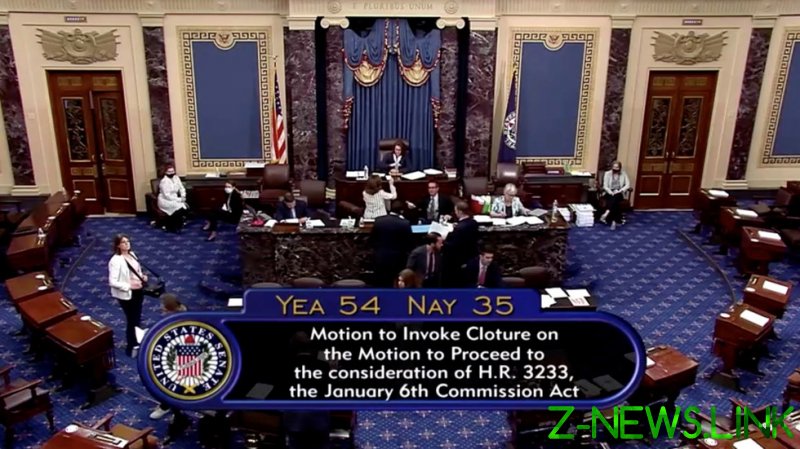 All but six GOP senators voted against cloture on Friday, keeping the House bill from getting the 60 votes it needed to end floor debate and elude a filibuster. The legislation calls for creation of a 10-member commission, much like the one that studied the September 11, 2001, terrorist attacks, to investigate the Capitol riot.

The proposed commission would enable Democrats to keep the party’s narrative of a GOP-inspired Capitol insurrection alive well into the 2022 election cycle. While such senators as Susan Collins (R-Maine) and Mitt Romney (R-Utah) have joined Democrats in calling for an independent probe, Senate Minority Leader Mitch McConnell (R-Kentucky) has argued that with congressional committees and the Justice Department already investigating the riot, a new commission would be redundant.

Democrats control the executive branch and both houses of Congress, but they lack a supermajority in the Senate, meaning the opposition party can stand in the way of partisan legislation. With Republicans deploying their filibuster power for the first time since Democrats took control of the Senate in January, some lawmakers are calling for changing the rules to give themselves de facto one-party rule.

“If Senate Republicans can block an independent commission investigating a deadly armed attack on the Capitol because it might hurt their poll numbers with insurrectionists, then something is badly wrong with the Senate,” Senator Elizabeth Warren (D-Massachusetts) said after Friday’s cloture vote. “We must get rid of the filibuster to protect our democracy.”

Unlike the House, the Senate requires a three-fifths majority (60 votes) to end debate on a bill. The filibuster has been used since the 1830s, with senators debating continually – or threatening to do so – to block a bill from advancing to a vote, thereby giving the minority party some leverage in legislative negotiations.

Senate rules were revised in 1917 to allow for a cloture vote to end debate, then requiring a two-thirds majority. The cloture threshold was lowered to a three-fifths majority in 1975. 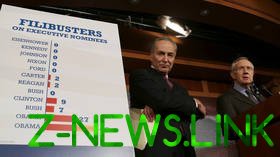 FILE PHOTO: Democrats Chuck Schumer (L) and Harry Reid are shown in a 2013 file photo, when their party ended the use of filibusters to block presidential nominees from being confirmed. © Reuters / Gary Cameron

President Joe Biden has shown reluctance to support eliminating the filibuster, a key feature of the American political system, but he signaled openness to changing the rules in March.

“If we have to, if there’s complete lockdown and chaos as a consequence of the filibuster, then we’ll have to go beyond what I’m talking about,” the president said, after first suggesting forcing Republicans to debate until they “collapse” rather than backing down from a vote when cloture is blocked.

Speaking to a fawning press corps outside a Cleveland ice cream shop on Thursday, Biden was again pressed on the issue, saying only that, “I can’t imagine anyone voting against the establishment of a commission on the greatest assault since the Civil War on the Capitol.”

The comment echoed the hyperbole that Biden used in April, when he said the Capitol riot was “the worst attack on our democracy since the Civil War.” Critics ridiculed that statement, noting such examples as presidential assassinations, the Japanese attack on Pearl Harbor, the September 11 attacks, the Oklahoma City courthouse bombing and 1971 and 1983 bombings of the Capitol itself.