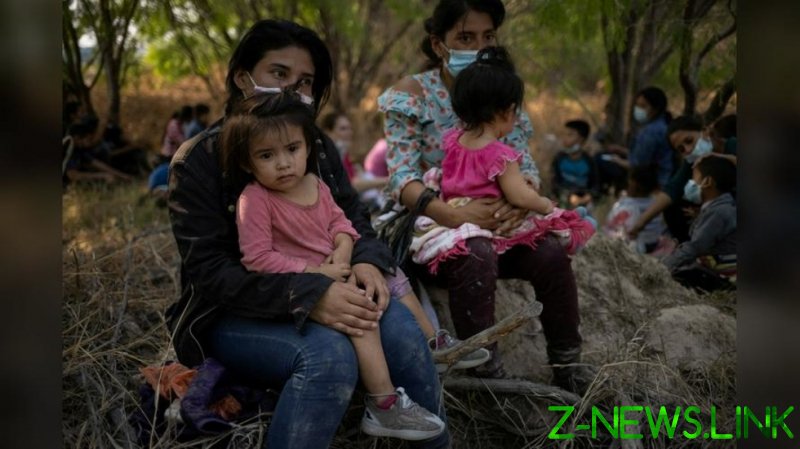 The incident occurred on March 16, when smugglers threw the baby girl into the Rio Grande River from their raft, according to a Facebook post on Tuesday by the Texas Department of Public Safety (DPS), whose Rangers helped Border Patrol in the rescue. Agents were able to save the child and bring her to safety.

The traffickers reportedly had been paid $3,500 to get the baby and her mother across the border, but DPS said they assaulted the mother and broke her leg during the journey northward. The raft was packed with 67 adults and 150 children, in addition to the mother and child. DPS gave no explanation as to why the smugglers threw the baby in the river.

The US has seen a surge in illegal immigration, particularly with unaccompanied minors, since President Joe Biden took office in January. Among the policy changes that Biden immediately implemented was a blanket rule allowing all unaccompanied children to stay in the US. Former President Donald Trump has blamed Biden for the crisis, calling his policies “illegal,” “immoral,” and “heartless.”

“Our great Border Patrol and ICE agents have been disrespected, demeaned and mocked by the Biden administration,” Trump said earlier this month. “A mass incursion into the country by people who should not be here is happening on an hourly basis, getting worse by the minute.”

The Border Patrol said it rescued more than 5,000 illegal aliens from “callous smugglers, scorching heat, unrelenting terrain and lack of water” in the federal government’s fiscal year ended on September 30, 2020. The agency has blamed “transnational criminal organizations” for recklessly exposing and abandoning the “human beings they are attempting to smuggle.”

Many of the rescues have been in the Rio Grande, including an incident earlier this month when a Guatemalan woman and one of her children were saved but her nine-year-old daughter drowned.

“One of the many things that has been lost in this current conversation about the border are the everyday heroes that put their own lives on the line to save those in need,” UFC fighter and former Army Special Forces operator Tim Kennedy said of the baby’s rescue.

But US Representative Alexandria Ocasio Cortez (New York) and other Democrats have demonized the Border Patrol, particularly during Trump’s presidency. Ocasio-Cortez, who opposed Trump’s border policies, likened border detention facilities to “concentration camps” in 2019 and called the Border Patrol a “rogue agency” with a “violent culture.”

And although Biden has faced increasing criticism this month over the “inhumane” conditions in which his administration is holding migrant children, Ocasio-Cortez denied on Tuesday that there is a border crisis, saying that instead it’s “an imperialism crisis, it’s a climate crisis, it’s a trade crisis.” She added that anyone using the word “surge” in reference to the current influx of migrants is invoking “white supremacy.”

Biden this month appointed Vice President Kamala Harris to lead diplomatic efforts with Mexico and Central American nations to help reduce the flow of migrants to the border. Former South Carolina Governor Nikki Haley and other Republicans criticized the decision, in part because Harris has compared US Immigration and Customs Enforcement (ICE) to the KKK in 2018.

A Twitter user posted a picture of the migrant baby being rescued from drowning in the Rio Grande and said, “Here’s your ‘KKK’ at work, Kamala Harris, and lest we forget, your ‘white supremacists,’ AOC.”

The Texas Rangers division of DPS has a special operations team that conducts covert and overt operations in remote areas along the US-Mexico border to “gather intelligence, conduct interdiction” and disrupt criminal activity involving drug cartels.