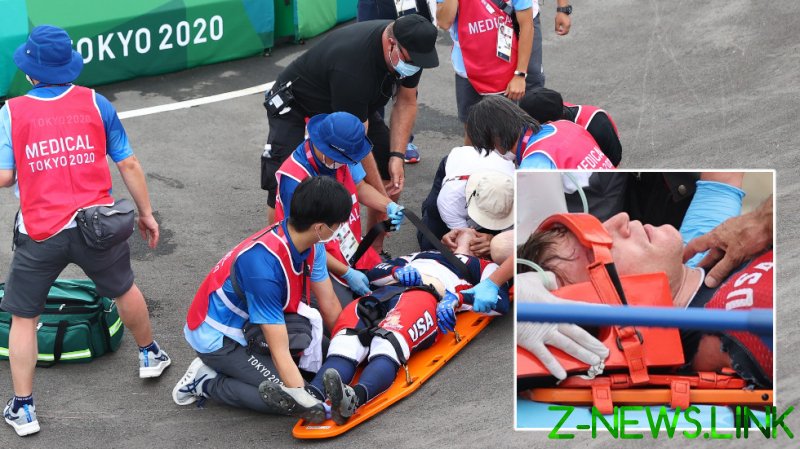 Fields, 28, was the red-hot favorite to retain gold five years after he stormed to victory in Rio de Janeiro but those hopes were dashed when the Texan was involved in a heavy accident early in Friday’s race.

The racer became entangled in a crowded group or riders, the force of which sent him flying over his handlebars and face-first into the asphalt, where he was soon joined by two other racers who were also caught up in the crash.

Fields was initially lying motionless on the track after the accident, with further concerns raised when he was removed from the crash site on a stretcher while being fitted with a neck brace.

It has since been confirmed that Fields suffered a litany of injuries in the smash including broken ribs and a bruised lung – but the most concerning effect from the accident was later revealed as a bleed on the brain.

“The doctors reported that Fields sustained a brain hemorrhage at the venue,” USA Cycling announced in a statement.

“After a night in the ICU, the doctors are pleased to report that there has been no additional bleeding and no new injuries were found,” they added.

Doctors have also stated that they felt comfortable in releasing Fields from intensive care after they found no further evidence of additional bleeds on his brain.

“There’s a bit of fluid on his brain but it has not increased for the last 24 hours, so they’re feeling good about that. So far the results seem pretty positive,” Fields’ father, Mike, told USA Today.

“Cognitively, he’s doing well. He knows where he is. He knows his birthday. He recognizes people.”

Team Netherlands’ Niek Kimmann was the envetual winner of Saturday’s final, and the Dutchman paid tribute to Fields after he won gold.

“I haven’t seen the crash, but I hope he’s OK,” he said. “He’s been a great ambassador for the sport. It’s sad he wasn’t able to defend his gold medal.”