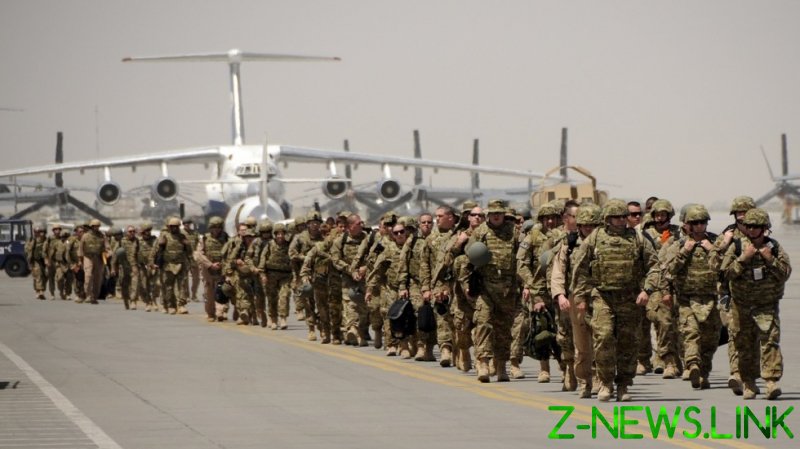 The White House confirmed that the exit had begun on Thursday night, with deputy press secretary Karine Jean-Pierre telling reporters on Air Force One that “a drawdown is underway.”

“Potential adversaries should know that if they attack us in our withdrawal, we will defend ourselves, [and] our partners, with all the tools at our disposal,” she said, adding that the American presence would temporarily grow before a final pullout.

While these actions will initially result in increased forces levels, we remain committed to having all US military personnel out of Afghanistan by September 11, 2021.

Multiple long-range B-52H Stratofortress bombers were made available to CENTCOM, the US military command that covers the Middle East and Central Asia, CNBC reported, while a Navy carrier strike group is also in the region to provide support if needed.

While former President Donald Trump had signed a deal with the Taliban last year that committed the US to a full withdrawal by May 1, 2021, his successor, Joe Biden, scrapped the agreement, instead pushing back the deadline to September 11. The Taliban previously vowed to resume attacks on US forces if all foreign troops were not out of the country by May, warning Washington would face “compounded problems” after Biden announced the later date earlier this month.

Beyond military involvement, the Biden administration has given itself a tall order in the country, with officials announcing a new plan to rewrite the Afghan constitution, arrange fresh elections and ink a power-sharing deal between the Taliban and the Kabul government last month. It remains to be seen what will come of the project, as months of bilateral negotiations in Qatar have made little progress in reaching a long-term peace deal between the two parties.

In Biden’s first address to a joint session of Congress on Wednesday night, he decried the “forever war in Afghanistan,” celebrating the planned withdrawal even while calling for an “over-the-horizon capacity” to be maintained in the region “to suppress future threats to the homeland.”

Exactly what shape that “over-the-horizon capacity” will take is not yet clear, but according to a recent report in the New York Times, the Pentagon is now discussing repositioning forces to neighboring states in the event they need to redeploy, suggesting Tajikistan, Uzbekistan and Kazakhstan as candidates. Such a move is not without precedent, with many American soldiers now “commuting” to work in Somalia from foreign bases after Trump ordered a withdrawal from the African nation late last year.

By far America’s longest war, the conflict has claimed the lives of around 2,400 US soldiers, 3,800 contractors, more than 47,000 Afghan civilians, and cost American taxpayers in excess of $2 trillion, according to the Costs of War Project. Despite fighting for more than 20 years, with US troop levels swelling beyond 100,000 during President Barack Obama’s 2009 “surge,” the Taliban continues to control wide swathes of Afghanistan, as recent local estimates indicate the militant group holds sway over more than half of the country.