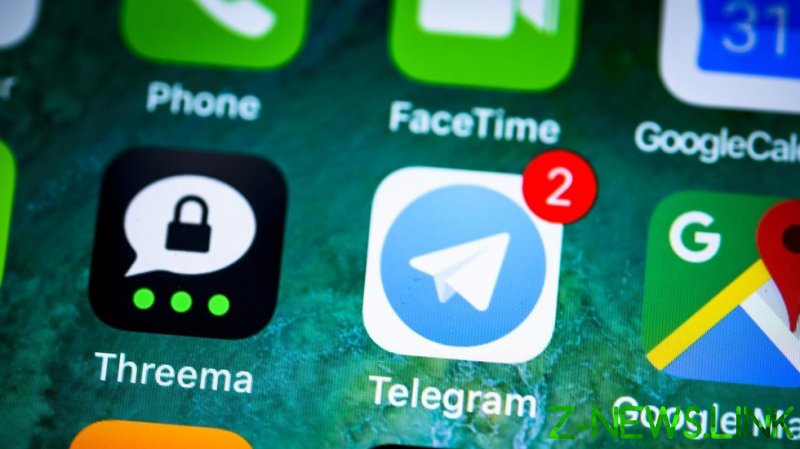 The Washington-based nonprofit and its president Marc Ginsberg, who served as US ambassador to Morocco from 1994 to 1998 and was Deputy Senior Adviser to the US President  on Middle East Policy (1978–1981), argue in the newly-filed federal lawsuit that Apple fails to hold Telegram accountable for violating its terms of service.

The complaint, filed on Sunday with the US District Court for Northern California, accuses Telegram of allowing anti-Semites, white supremacists and other extremists to thrive on its platform, with Apple purportedly turning a blind eye on the fact.

“Telegram currently serves as the preferred Neo-Nazi/white nationalist communications channel, fanning anti-Semitic and anti-black incitement during the current wave of protests across America,” the lawsuit argues. It alleges that the privacy-focused messaging app is poised to become an even bigger breeding ground for extremist content as users “migrate to Telegram” after Big Tech’s crackdown on Parler, booted from Apple and Google stores for giving a platform to some of the pro-Trump supporters that stormed the US Capitol.

The suit posits that if Apple fails to remove the app, it may give rise to street violence, arguing that the app “is currently being used to coordinate and incite extreme violence before the inauguration of President [-elect] Joe Biden.”

Ginsberg, who is a co-plaintiff in the suit, notes that in a letter to Apple in July he already asked the tech behemoth to pull Telegram to hold its “financial feet to the fire,” but has received no reply. The former US official, who is Jewish, argues that Apple’s inaction has caused him “emotional distress” through the use of his iPhone. Ginsberg estimated damages he allegedly suffered as a result of Apple’s perceived leniency towards the messaging app at over $75,000.

“By continuing to host Telegram on the Apple App Store, Defendant facilitates religious threats against him and his family that has caused Ambassador Ginsbergto fear for his life,” the complaint charges.

Arguing that Apple should banish Telegram from its store without delay, the suit draws on Parler’s case as a precedent, noting that: “Apple has not taken any action against Telegram comparable to the action it has taken against Parler to compel Telegram to improve its content moderation policies.”

The nonprofit told the Washington Post on Sunday that it plans to mount a similar lawsuit against Google.

Telegram has seen an explosive growth in its user base after established social media platforms, such as Twitter, Facebook and YouTube blocked US President Donald Trump and launched a crackdown on his supporters.

The messaging platform, which prides itself for its end-to-end encryption for messages, reported over 500 million monthly users in the first week of January, with CEO Pavel Durov saying that it added 25 million new users in just 72 hours. However, while some portion of the newcomers might have indeed been conservatives fleeing the wide-ranging social media purge, Durov said that almost two in five new clients came from Asia, 27 percent from Europe, and 21 percent from Latin America.

While facing constant criticism for its lax moderation policies, Telegram has recently made headlines for banning“dozens of public channels” for inciting violence.