Home / WORLD / US approves ‘voluntary departure’ of diplomats from Kazakhstan

US approves ‘voluntary departure’ of diplomats from Kazakhstan 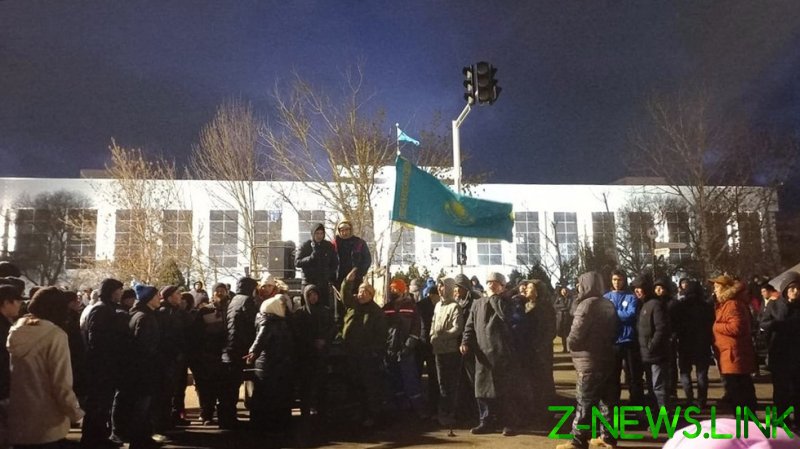 Washington has stopped just short of ordering the evacuation of US government staffers in Kazakhstan amid rioting and violence across the country, calling the move a “voluntary departure.”

“US citizens in Kazakhstan should be aware that violent protests may severely impact the US Embassy’s ability to provide consular services, including assistance to US citizens departing Kazakhstan,” the State Department said in an updated travel advisory on Friday, adding that the decision applies to all “non-emergency US government employees” working at the consulate in Almaty, as well as their family members.

The new alert follows days of heated demonstrations in Kazakhstan, initially prompted by a sharp spike in fuel prices just after the new year. Though President Kassym-Jomart Tokayev agreed to reinstate price controls for liquefied petroleum gas and meet other protester demands, the demonstrations have only grown in violence and intensity, with rioting, looting and arson prompting a peacekeeping deployment by the Russian-led Collective Security Treaty Organization (CSTO).

“Demonstrations, protests, and strikes may occur,” the State Department advisory continued. “These events can develop quickly and without prior notification, often interrupting traffic, transportation, communication, and other services; such events have the potential to turn violent.”

The CSTO mission kicked off earlier this week and, according to President Tokayev, has helped to restore order in Kazakhstan, even though forces from the regional security bloc were not deployed to directly confront rioters. The government said the situation is now largely under control despite some hold-out protests and sporadic clashes. Over 4,000 people were reportedly detained by local security forces, while dozens were killed after allegedly confronting police with weapons. Hundreds of police officers have also been wounded and at least 18 were killed amid the chaos.