Home / WORLD / US aircraft down during NATO drills

US aircraft down during NATO drills 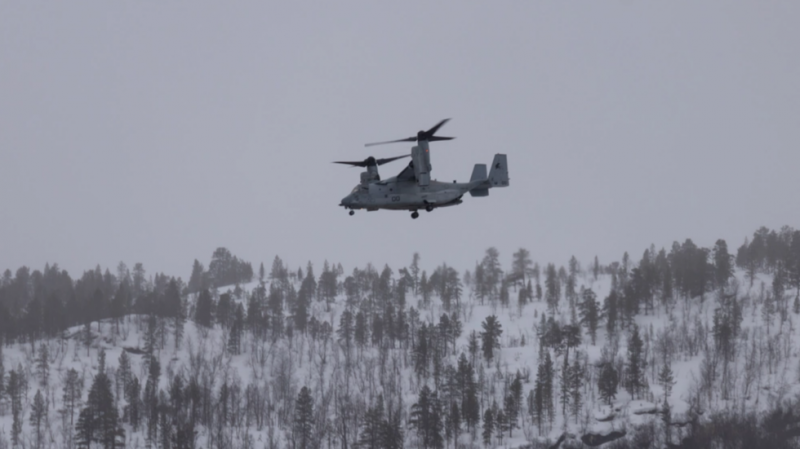 A US Marine Corps aircraft with four people on board went missing in northern Norway during the “Cold Response” NATO exercises in the Arctic, the Norwegian military confirmed on Friday. A possible crash site has been located and rescue crews are trying to reach it overland due to bad weather conditions.

The V-22 Osprey was on a training mission and was due to land at the Forsvaret Air Force base of Bodo at 6 pm local time on Friday, the Norwegian military said in a statement. Its last known location was at Saltfjellet, a mountain range in the Nordland province.

Search and rescue efforts were launched by 6:30 pm local time, and “discoveries were made from the air” at 9:17 pm, at Gråtådalen in Beiarn, the military in Oslo added. Due to the bad weather conditions, however, local police and rescue services have been dispatched to the site by road.

“There have been snowstorms in the area and winds that are quite strong and increasing. So the weather is playing against us,” rescue service spokesman Thomas Ringen told the newspaper VG.

However, Ringen said the “area of interest” is not far from a road, so he hoped it would be “reasonably easy” for rescuers to reach it.

Friday was supposed to be the last day of Cold Response 2020, a massive NATO exercise hosted by Norway and designed to test alliance forces’ capabilities and cooperation “in a challenging Arctic environment with rugged terrain and extreme cold weather,” according to the US Marine Corps.

Some 1,500 US troops from the USMC, Army, Navy and the Air Force were to take part in the drills, along with forces from eight other NATO and “partner nations” numbering 15,000 in total.

The tilt-rotor Bell-Boeing V-22 is an aircraft of unique design, capable of taking off and landing like a helicopter but flying like an airplane. This makes it challenging to fly, however. During development, the model had four crashes that resulted in 30 deaths. Twelve more people have died in seven crashes since the V-22 went into service in 2007, operated mainly by the Marines and the US Air Force.