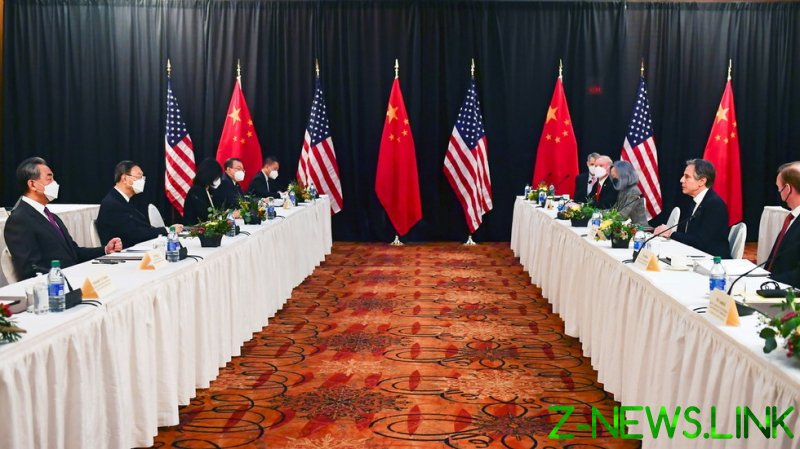 Blinken opened Thursday’s summit with a series of charges against Beijing, voicing “deep concerns” about alleged “economic coercion” against US allies, rights abuses within China and the threat the country poses to the “rules-based order that maintains global stability.”

“The United States uses its military force and financial hegemony to carry out long arm jurisdiction and suppress other countries,” replied Yang, director of the Central Foreign Affairs Commission of the Chinese Communist Party, who launched into a 15-minute speech pushing back on Blinken’s comments.

Yang added that Washington “abuses so-called notions of national security to obstruct normal trade exchanges, and incites some countries to attack China,” while insisting the US was not coming from a “position of strength.”

Responding to Blinken’s human rights concerns, Yang shot back that the US has its own “deep-seated” issues with the rights of its citizens, citing regular reports of police brutality and killings of unarmed suspects by law enforcement.

Not long after the exchange, a senior US official denounced the diplomat’s lengthy reply as a violation of protocol set out ahead of the talks, which called for two minutes of opening remarks from each of the principal negotiators.

“The Chinese delegation… seems to have arrived intent on grandstanding, focused on public theatrics and dramatics over substance,” the official, who asked not to be named, told reporters in Anchorage.

A member of the Chinese delegation told state media that it lodged a “stern response” after the American side “overran its time first and made unreasonable accusations,” adding that Beijing had come to Alaska “with its mind set on strategic dialogue.”

The verbal jousting at Thursday’s summit was preceded by a harsh joint statement by Blinken and his Japanese counterparts following a visit to Tokyo earlier this week, which accused Beijing of “destabilizing behavior” and violating the “international order,” also backing Japanese claims to the disputed Senkaku Islands, known as the Diaoyu Islands to China.

One day later, Washington announced a new round of sanctions for 24 officials in China and Hong Kong, pointing to what it deemed a crackdown on the city’s semi-autonomous status.

The Chinese Foreign Ministry condemned those moves ahead of the Alaska meeting, voicing hopes Washington would drop its “microphone diplomacy” and approach the talks in a “constructive manner.”