Home / WORLD / US ‘a long way off’ from democracy or freedom, Ron Paul tells RT

US ‘a long way off’ from democracy or freedom, Ron Paul tells RT 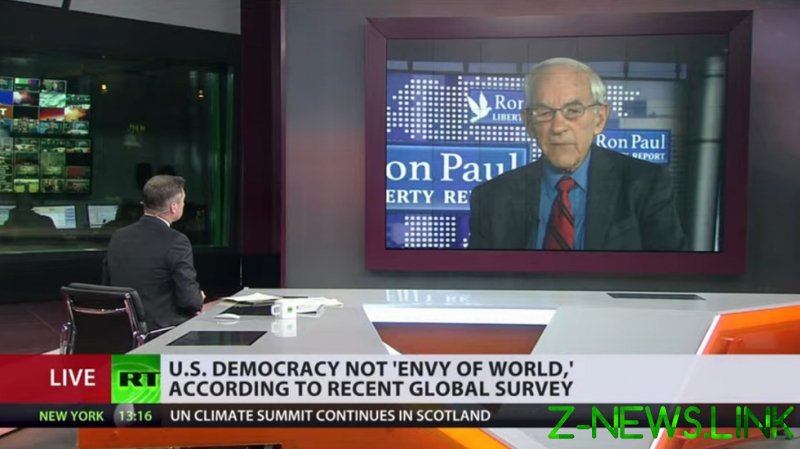 A new Pew Research poll of 16 advanced economies showed widespread belief that the US healthcare system is below average or downright bad, while only 17% thought American democracy was a good model for other nations.

“We deserve a lot of that criticism,” Paul told RT on Tuesday. He blamed the results on “corporatism,” which he says is the underlying philosophy of the government as currently practiced in the US.

The retired physician who represented Texas in Congress for decades added that “it’s not the people voting, it’s really the corporations that run things,” from healthcare to schools and the military-industrial complex.

Democracy is fine when electing officials, Paul explained, but when it gets to the majority dictating to the rest how to live, what to believe, even how to practice medicine, it becomes a problem. What the US has now is a combination of big business and big government running things, he added.

“A good republic, a good system, wouldn’t have us spending trillions and trillions of dollars, taking advantage of the fact that we have the reserve currency of the world and people still trust us to take care of the dollar. But that’s ending, and that’s why I think people are starting to say ‘can we really trust the Americans’?” Paul said, adding that the US is headed for a “major” financial and banking crisis as a result.

He also believes the entire US pandemic response was “essentially wrong,” from the initial lockdowns to mandates and government interference in how doctors practice medicine – which Paul contrasted to the way things were back when he was a practicing physician.

The Pew poll, made public Monday, showed that 16 developed nations ranked the US highly on technology, entertainment and education. However, a median of 48% thought American healthcare was below average and 18% considered it the worst. Meanwhile, only 17% thought the US political system set an example worth following, while 57% said it used to be, but not in recent years. American democracy ranked the highest in Italy at 32%, and the lowest in New Zealand, where only 8% of respondents said it was a good example.

Americans were far more critical of their own political system, with only 19% telling Pew it was a good example, while 72% said it used to be, but no longer.