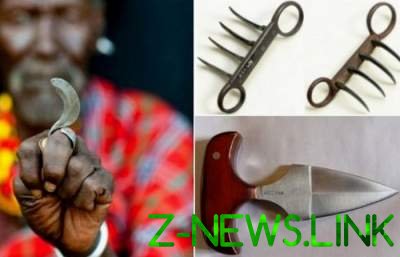 In human history, weapons have always occupied a special place. Even the ancients used the weapon for hunting and for the extermination of their own kind. Humans evolved, and with them the improved weapons. Today, when it comes to ancient weapons, the first thing many think of is swords, spears, axes and bows. But in fact there was a lot more unusual and exotic weapons. 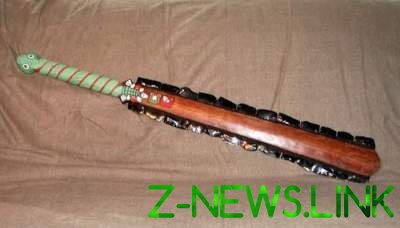 The macuahuitl is a weapon in the form of a wooden sword. In his hand was embedded with prismatic blades made of obsidian (volcanic glass). It was like a large wooden club with cuts on the sides, and inserted the pointed pieces of obsidian, and then fixed with glue.

The length of the macuahuitl ranged from 90 to 120 cm. Since the macuahuitl was not sharp tip, it was impossible to use as stabbing weapons, but the jagged rows of obsidian fragments in hacking attacks left body of the enemy deep lacerations. 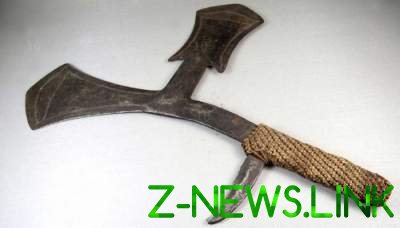 The ping – multiblade throwing knife used by the tribe of azande uplands in Nubia. This knife length 55 cm was three blades of different shapes, and they possess could only professional soldiers. Blade ping had a special way that increased the chances of defeat for the enemy when thrown.

Pinotti is a sword, which was used in the Visayan Islands in the Philippines. This weapon was originally an agricultural tool. The handle is usually made of guava wood, which is distinguished by its ease.

The blade length is from 40 until 45 centimeters. When pinati used as agricultural tools, usually the blade was covered with a dark patina, and when the weapon took to battle, the farmer sharpened the blade of the white. 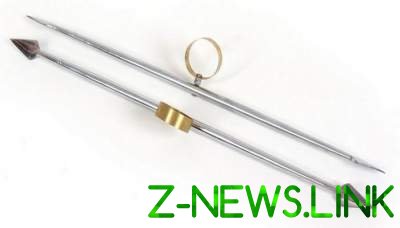 This weapon was used in the traditional Chinese martial arts. Amaechi used for stabbing attacks. This is a pair of metal rods with sharp ends. They are usually mounted on a detachable ring worn on the middle finger. These weapons originated at mount Emei, and is used in martial arts to this day. 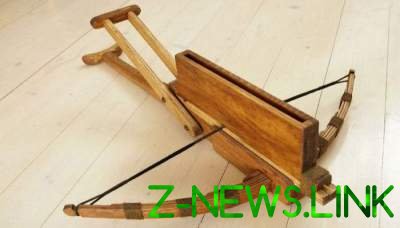 Chinese weapons, “Cho Ko nu” was actually the ancestor to the automatic rifle. In fact, it was the crossbow only multiply. On his bed was equipped with a special “store”, in which invested 10 bolts. After the shot, the bowstring was uzvedibas again, and the new bolt went down in the box.

Compared to a conventional crossbow Cho Ko nu was a smaller range and less power, but he was different at a much faster recharge. For greater efficiency some of the bolts smeared with poison from the deadly Aconite flower, also known as wolf flower. 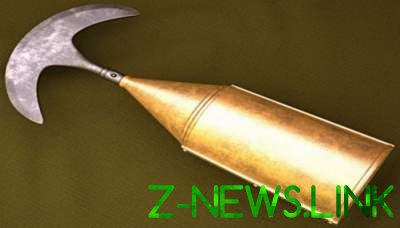 “Scissory” was a type of Roman Gladiator that fought with a short Gladius (sword) in one hand and scissored to another. This weapon was a small sword in one handle or hollow steel tube which is dressed on the forearm of a Gladiator and had a semicircular blade on the end.

Handle inside the tube allowed the Gladiator to keep the weapon in the midst of battle. The Gladiator could use his protected arm to block the opponent’s blows and quickly counterattack. The shape of the blade was such that even the slightest touch could cause serious injury. 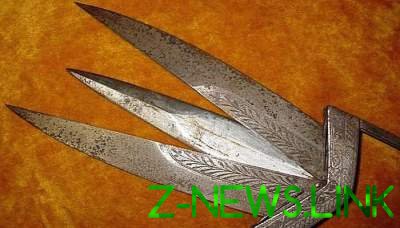 Originally from the Indian state of Tamil Nadu, Qatar is a bonded dagger type. It is characterized by its H-shaped horizontal hand grip, which leads to the fact that the blade of the dagger is over the knuckles of the user.

Ceremonial Katara were also used for ritual purposes. Qatar first glance has a single blade, however when he cocked the trigger on the handle, the blade was divided into three. 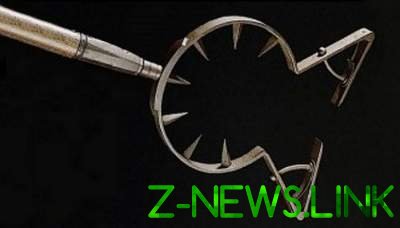 The following exotic type of spear weapon was used in Europe in the XVIII century. It consisted of a pole, at the end of which was two gear the end. Each prong had a spring-loaded latch. This was done to catch between the serrated endings of people who then couldn’t get out of the trap. The weapon was used to stasiunai people with horses and “prokalyvanie” them helpless to the ground. 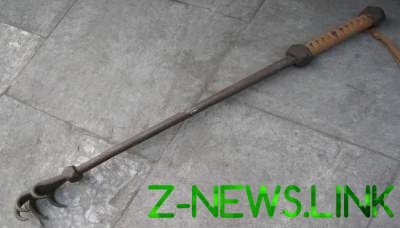 Incredibly strange Chinese weapon looks like an iron hand. At the end, joy was curved claws that pierced the flesh, and then pulled out a piece. The weapon was designed to pull a rider off his horse and to snatch the enemy’s shield out of his hands. The next shot was aimed at his face. It should be noted that the weight JW was enough to kill the enemy. 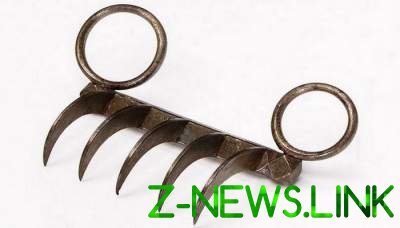 Bug nah – it’s korepodobnoj Indian weapons. The term bug tries means tiger’s claw in Hindi, so this weapon is also called the claws of the tiger. It consists of four or five curved blades affixed to a crossbar or glove. Bug tries was designed for cutting skin and muscle.

It is believed that he was inspired by the claws of big cats. Bug Nakh was first developed in India, it was first used the first Maratha Emperor Shivaji to defeat the Bijapur General Afzal Khan. Subsequently, Bengali girls began to wear a sharp weapon resembling Bagh Nakh, as a school, to be able to defend themselves.