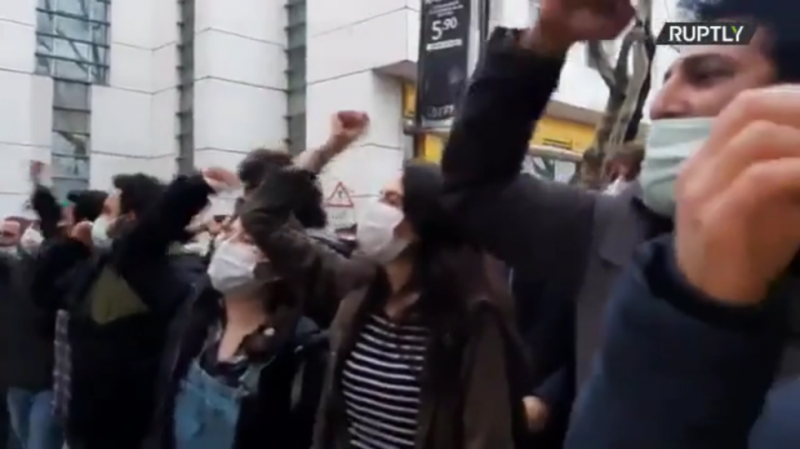 Footage published by RT’s video agency Ruptly shows students and police shoving each other during a heated confrontation at Bogazici University, in Istanbul. The officers used riot shields to contain the crowd, and one was seen throwing punches at a demonstrator. Amid shouting and isolated scuffles, several protesters were filmed being detained and escorted to police vans. One clip shows an elderly woman pleading with police as they made arrests.

Demonstrations at the prestigious research university began nearly a month ago, after Turkish President Recep Tayyip Erdogan appointed Melih Bulu, an academic and politician who backs Erdogan’s Justice and Development (AK) Party, as rector of the institution.

Student protesters, who have been joined by some professors, say the appointment was undemocratic, and have urged the government to allow them to appoint their own rector.

The situation became more volatile after demonstrators hung a piece of artwork near the new rector’s office depicting the Kaaba, in Mecca – an Islamic holy site – and pictures of the LGBT rainbow flag. On Saturday, four students were arrested and charged with “inciting hatred” for displaying the image.

During a protest on Monday, demonstrators at the university demanded the release of the detained students. Police made 159 arrests after the crowd reportedly refused to disperse, although most of the protesters were released the next day.

The ongoing unrest prompted Erdogan to speak out against the activists. In a video address broadcast on Monday, he told AK Party supporters that the conservative political movement would “carry our young people to the future, not as the LGBT youth, but as the youth that existed in our nation’s glorious past.”

Homosexuality is legal in Turkey, but the conservative, Islamic movement led by Erdogan has grown increasingly hostile towards LGBT rights.