Universal is adapting the comic book “Kill the Minotaur”

The company Skybound Entertainment owned by the author of “the Walking dead” Robert Kirkman, has teamed up with Universal Pictures to work together on adapting comic book series “Kill the Minotaur” (Kill the Minotaur).

The script will write the direct creators of the original Christian Cantamessa and Chris Pasetto. He’s already tried in a movie before. In 2014, on a joint script released post-apocalyptic Thriller ‘ Air ‘ with Norman Reedus and Dimona Khonsu, and directed by Sam Cantamessa. But they say the actors — it’s the only thing that was good in the film.

Maybe this time they have something more serious?

Launched in June, the comic book series is a fantastic modern look at ancient Greek myth of Theseus and the Minotaur, a creature that is only half a man and half bull. In this reimagining of the legend of Theseus still have to enter the labyrinth of king Minos, but now the location will be larger and more fantastic. Theseus tries to defeat the monster, feeding on human victims, but the Minotaur their plans, and they threaten the world.

Quite simply, as for me. But the theme-that — fire! After all, the Minotaur can serve as a symbol of some submerged animal nature. Or you can imagine him as the victim. But no, you guys made him a supervillain. Okay. On the other hand, I like the emphasis in technology instead of magic and all that.

In any case, it all depends on adaptation, right?

As stated, Universal want to make the “Kill Minotaur” sci-Fi Thriller with the scope of the present blockbuster. 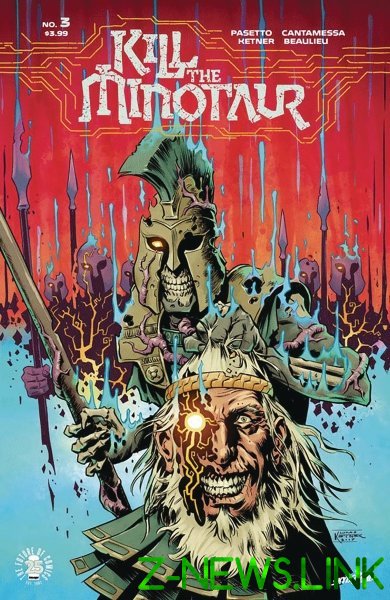