Home / WORLD / Unionist anger over an IRA funeral blamed for the unrest in Northern Ireland, but the real reason is Brexit

Unionist anger over an IRA funeral blamed for the unrest in Northern Ireland, but the real reason is Brexit 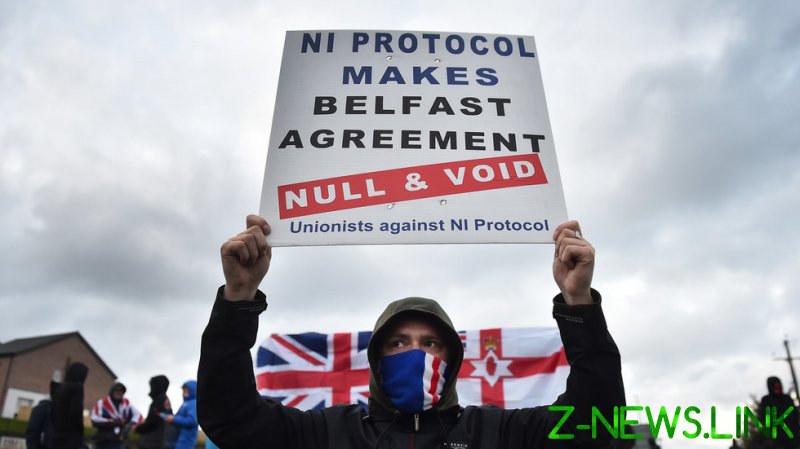 Over the past few weeks, Northern Ireland has been rocked by unrest and rioting in its unionist community. As of last night, 41 police officers have been injured in the scuffles which have seen vehicles destroyed and petrol bombs hurled. The British media have been conspicuously silent on it, with the BBC relegating the story to its Northern Ireland section, leaving it absent from the homepage.

While unrest is no stranger to this part of the country in historical terms, having faced decades of turbulence during ‘the Troubles’, the recent riots are drawing off the negative energy of an unsettling new development which has had profound implications for the area’s future: Brexit.

Northern Ireland is a conflict of identities. Catholic and Protestant. Republican and Loyalist. Irish and British. The instability in the country is a product of a century-long dispute over to whom Ulster belongs. The largely Catholic Republicans argue that there should be a ‘United Ireland’, and that Northern Ireland is a longstanding occupation of the island’s northern third by the British Crown. The predominantly Protestant Loyalists, on the other hand, descendants of Scottish settlers into the territory, pledge their allegiance to the United Kingdom, and were instrumental in leading the six counties of Ulster to break from the newly formed Irish state and rejoin Britain nearly a century ago.

The latter group were subsequently favoured and actively suppressed the Republican-leaning population, creating the longstanding instability the area is infamous for and led to ‘the Troubles’ of the 70s, 80s, and 90s. Then, in 1998, the landmark Good Friday Agreement was reached and saw the groups and communities compromise for peace, a new power sharing model, and an open border with the Republic. However, Britain’s departure from the European Union has placed this open border in jeopardy. Brexit coverage has for the past four years been synonymous with the words ‘Northern Ireland’, particularly because leaving the EU customs union means an open border between Northern Ireland the Republic has become untenable, threatening the agreement’s terms.

This forced the British government to make the concession in the final ‘Brexit deal’ of placing Northern Ireland in an entirely different customs territory altogether, drawing up a hard ‘sea border’ between NI and the rest of the UK. Predictably, this concession has enraged unionists who see it as undermining national sovereignty and their connection to the rest of Britain. This has not been the specific trigger for the recent unrest but is a strong motivating factor. That was the announcement last month that police would not prosecute Republican leaders for holding a public funeral involving around 2,000 people for former IRA leader, Bobby Storey, last June, despite it being in clear contravention of Covid-19 lockdown rules.

This has upset the delicate balance between the communities, and led to an outburst of anger from unionists who believe their cause is being undermined, something which Brexit has added fuel to the fire on. Subsequently, sporadic violence and rioting from unionists, attacks on police and destruction of vehicles has sprung up. Yet the BBC only seems to consider the spree of riots as local news, but of course, if this was related to unrest in Hong Kong or Russia, it would be earmarked as the leading story of the day and given widespread coverage on its social media accounts, but with this it seems to play down the story as has most of the country’s right-wing media.

Why is this the case? The British government has in fact always had control over the press coverage when it comes to “matters of national security.” It has a long and well documented history of imposing censorship during ‘the Troubles’. The BBC’s self-description as an independent broadcaster is misleading as its editorial line can be curbed by the British state.

In this case, keeping Northern Ireland low on the news agenda is vital because Downing Street is scrambling to keep the Good Friday Agreement together and avoid broader national scrutiny of the situation and the longstanding implications of the withdrawal agreement. The Bobby Storey funeral controversy has been a specific boiling point, but this should not be a distraction from the fact that Boris Johnson has permanently damaged the delicate status quo between Republicans and Loyalists in Northern Ireland and rattled decades worth of peace. One group is angry, and this is going to make things fragile for some time now.