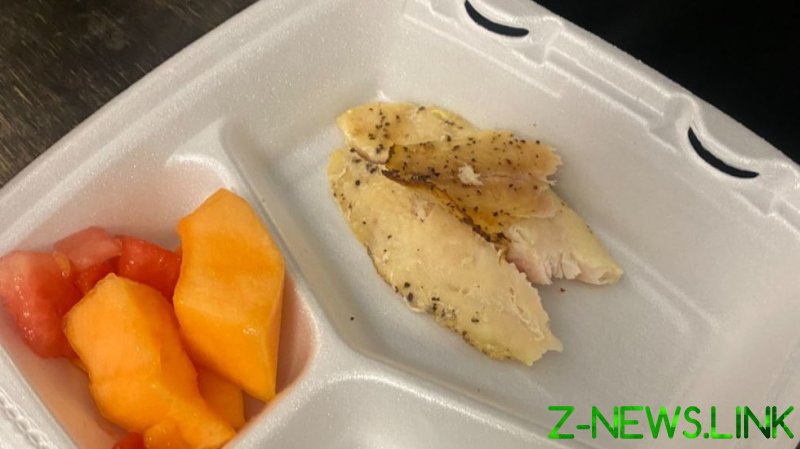 The 28-year-old Afghan translator, Hamed Ahmadi, posted a photo of one of his dinners at the facility on Twitter on Thursday, showing a few pieces of chicken, some bread, and some fruit.

“Not complaining but this is what I got last night for dinner and the next meal is 12 hours later. Refugee life might be safe but never easy & favorable,” Ahmadi wrote.

Despite having less than two thousand followers, Ahmadi’s post soon went viral and received thousands of replies, with some social media users expressing sympathy, but many accusing him of being ungrateful.

“This isn’t how you say thank you,” tweeted American journalist Jon Nicosia, while a US veteran wrote, “It’s better than a lot of the meals I ate while spending 18 months in your country doing what you wouldn’t.”

Republican commentator Amy Tarkanian declared, “I was unable to reach a homeless veteran to ask how they like their free meals and free housing because they don’t get those things. Also they don’t have iPhones.”

Others called on Ahmadi to leave the US and return to Afghanistan if he wasn’t happy with the quality of food at Fort Bliss.

In an interview with the Independent, however, Ahmadi insisted that the point of the tweet was not to complain about the US’ hospitality, but instead to point out that Afghan refugees like him “are in the situation that they never really wanted to be in.”

“I had a pretty good job back in Kabul. I had a decent life. I had my family,” he explained, noting that he was “forced to flee Afghanistan” and give up everything  after the Taliban took control of Kabul in the wake of the US’ withdrawal of troops from the country last month.

“I wanted to say that this is the refugee life. And we need to be patient,” Ahmadi said.

According to his Twitter account, Ahmadi left Afghanistan for the US as a refugee after his elderly mother told him to escape.

“She lost a son to a pointless war, a daughter to covid and now another son to migration,” Ahmadi claimed, adding that his mother told him to leave the country because she “can’t bear any more loss in this family.”

Fort Bliss in El Paso, Texas – a US Army post – has become a major center for Afghan refugees, housing more than half of the country’s intake as they file their visa applications to stay. Last month, Texas Congresswoman Veronica Escobar revealed that Fort Bliss was preparing to keep the refugees “for an extended period” until the visas have been approved or rejected.

Ahmadi is not the first refugee to complain about conditions at Fort Bliss, however, with videos from the facility showing dirty and insect infested rooms. Other refugees have claimed that as many as ten people are packed into a single room and that the “inhumane” conditions are similar to “prison life.”

“There is nothing here – no library, nowhere for kids to play – we just eat and sleep inside,” one woman protested.

Fort Bliss public affairs director Lt. Col. Allie M. Payne responded to complaints by claiming that though the refugee aid effort “has not been perfect,” they have “not wavered” in their “commitment to temporarily house our guests in the safest conditions” and have “already identified the need to shift maintenance resources to facilities most in need and to increase the frequency of cleaning.”