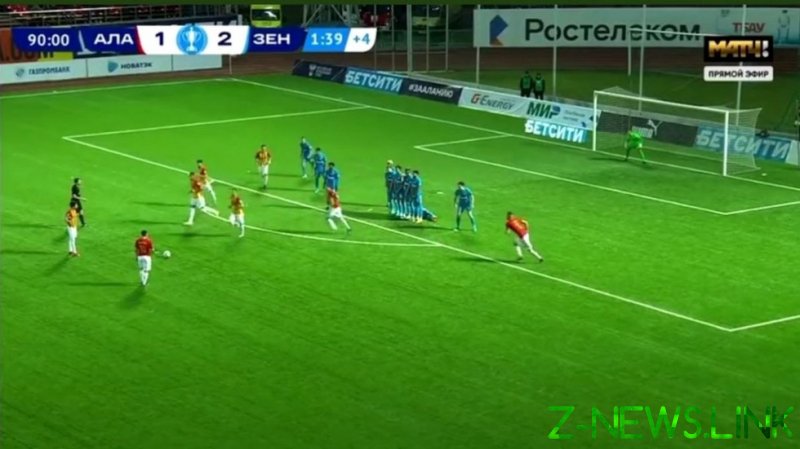 If you’re looking for inventive free-kick routines capped by perfectly-placed finishes, then look no further than the brilliant goal by Alania Vladikavkaz in their Russian Cup giant-killing of Zenit St. Petersburg.

Trailing 2-1 to reigning Russian Premier League champions and deep into injury time of their quarterfinal on Wednesday night, Alania found themselves with a free-kick position some way outside the Zenit box.

As Zenit arranged their wall and assumed a defensive line, Alania players initially adopted conventional positions alongside them.

But after the whistle blew, the Alania bodies ambled out en masse towards the free-kick taker, with some stepping over the ball on the way.

The intricate move did not end there as one Alania player dummied as if he was taking the shot, before Nikolai Giorgobiani stepped up to curl a perfect right-footed effort beyond the reach of full-stretch Zenit keeper Mikhail Kerzhakov and into the net.

The sumptuous strike sent the tie to penalties, where Alania humbled the visitors from the northern capital 6-5 to book a spot in the Russian Cup semifinals.

Caucasus outfit Alania play their football in Russia’s second-tier FNL but have a famous history dating back to 1921, and were even crowned Russian champions in 1995.

They’ve also featured in European campaigns in the Champions League and UEFA Cup.

The ‘Red-Yellows’ took the lead against current Russian Premier League leaders Zenit on the artificial surface at the Sultan Bilimkhanov Stadium in Grozny on Wednesday night thanks to a Batraz Gurtsiyev goal on 55 minutes, before strikes from Brazilian full-back Douglas Santos and Russian forward Ivan Sergeyev put Zenit in front inside the last 10 minutes.

But Giorgobiani then hit his delightful injury-time effort before shootout drama saw Aleksei Sutormin and Danil Krugovoy miss their spot-kicks to send four-time winners Zenit out of the competition.

READ MORE: Goalkeeper scores stunning goal from deep in own half (VIDEO)

Elsewhere, Moscow rivals Spartak and CSKA clashed in their quarterfinal, which was settled the way of Spartak thanks to a 21st-minute penalty from Zelimkhan Bakaev.

CSKA were forced to play the second half with 10 men after a red card to Jean-Philippe Gbamin in first-half injury time.

The other teams remaining in the competition are Russian Premier League highflyers Dynamo Moscow, who overcame second-tier FK Baltika Kaliningrad on penalties, and Yenisey, who stunned Leonid Slutsky’s Rubin Kazan 3-1 in their quarterfinal clash.

The draw for the semifinals takes place on Thursday evening,