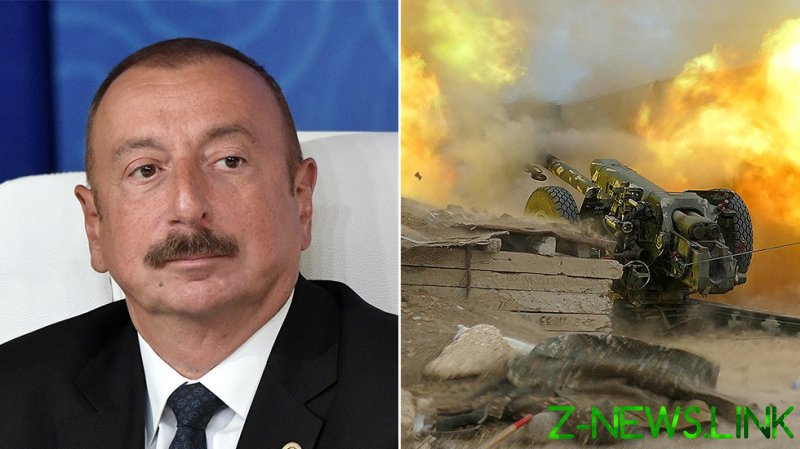 The Azerbaijani leader was speaking to Moscow news agency RIA Novosti, which interviewed the leaders of both Azerbaijan and Armenia on the future of the ongoing Nagorno-Karabakh conflict.

“As for our red line, we have stated it very clearly,” Aliyev explained. “Under no circumstances can the territorial integrity of Azerbaijan be violated. Under no circumstances will Azerbaijan consent to the independence of Nagorno-Karabakh.”
In 1991, Nagorno-Karabakh declared independence from Azerbaijan, but the region is internationally classified as part of Azerbaijan. No UN member states have recognized the breakaway republic.

However, the disputed land is mainly populated by ethnic Armenians. Baku considers the enclave to be illegally occupied by Yerevan, and has stated its goal to gain full control of its territory.

Earlier, Armenian Prime Minister Nikol Pashinyan stated that his country supports Nagorno-Karabakh’s right to self-determination, describing that as non-negotiable. According to Pashinyan, Baku won’t accept that the region has this right, while Yerevan is ready for compromise.

On September 27, the region saw the largest escalation in violence for almost three decades. In the weeks since the fighting began, leaders from around the world, including Russian President Vladimir Putin, have repeatedly called for peace in the region. Last week, Moscow helped negotiate a ceasefire, but that appears to have been quickly violated. Since 1992, negotiations on a peaceful settlement have been conducted within the framework of the OSCE Minsk Group, headed by three co-chairs: Russia, the US, and France.